In an announcement today, the IMF Executive Board has confirmed the previously suggested extension of the current SDR basket of currencies by nine months from December 31 this year up until September 30th next.  This leaves the way open for changes to be made, and implemented, in the structure of the SDR basket for a revised basket (if so chosen) to be implemented in October 2016.

The proposal for the extension was put forward by IMF staff in a paper published on August 4, 2015 (see Review of the Method of Valuation of the SDR – Initial Considerations) and subsequently submitted to the Executive Board for lapse-of-time decision.

Normally the IMF would review, and restructure if it chooses to do so, the SDR basket every five years which would have made this process due to be announced in October this year, and implemented at the beginning of next.  However the extension is undoubtedly due to internal arguments over the inclusion of the Chinese renminbi and the delay gives the Chinese time to meet some of the requirements of key IMF board members (the USA?)  which have almost certainly already led to China’s recent renminbi devaluation against the U.S. dollar.  This may at least give it the appearance of no longer being tied directly to the greenback with which it had been in lockstep for a number of years.  Whether China will allow a full float of the renminbi on the global currency markets remains to be seen – this may be a step too far, and perhaps also an over-worrying move if implemented for some IMF board members (the USA again?)

The official statement from the IMF says that the ‘nine-month extension is intended to facilitate the continued smooth functioning of SDR-related operations and responds to feedback from SDR users on the desirability of avoiding changes in the basket at the end of the calendar year. The extension would also allow users sufficient lead time to adjust in the event that a decision were to be taken to add a new currency to the SDR basket.’ (The italics are ours – with the only currency likely being considered for inclusion being the Chinese renminbi, and with the country’s now global top GDP status as confirmed by the IMF, it would presumably form a major – if not the major – currency in the SDR basket.)

The inclusion of the renminbi in the SDR basket may be seen by many as downgrading the status of the U.S. dollar in global trade and even possibly as the leading global reserve currency with all the advantages that brings.  However any such change in status may take some years to take effect. 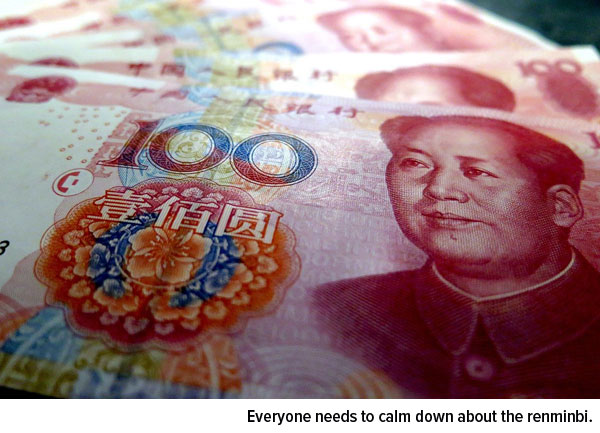 First it was the U.S. Federal Reserve. Then, in 2013, Japan launched what became known as Abenomics. The European Central Bank (ECB) followed suit in 2014. And now the People’s Bank of China has joined the parade.

All of them in some way stimulated economic growth by initiating monetary quantitative easing (QE) programs.

The media and politicians applauded them for their QE plans. All of them, that is, except for China. Instead, we’ve only seen a flurry of negative headlines.

I often tell investors to follow the money, which currently is cheap to borrow. Cheap money is good for stock prices, but not for retired folks who have most of their savings in term deposits with low interest yields.

On Monday, China unexpectedly trimmed the value of its currency, the renminbi, 2 percent, the most in two decades. In the days since, many analysts and “experts” have irrationally turned sour on the Asian country, similar to the extreme bearishness toward gold in the last month.

But investors last week came home to the yellow metal after China announced it had increased its gold reserves by an additional 19 tonnes in July, boosting its total holdings to 1,677 tonnes (nearly 54 million ounces). This helped prices rally 1.4 percent on Wednesday to reach $1,124.46, a three-week high.

Investors should likewise return to China when they realize that the global reaction to the renminbi devaluation has been hugely overblown. I agree entirely with my friend Addison Wiggins, who writes in his Daily Reckoning newsletter:

The market is up in arms about this currency move. And frankly most things that I read from the market have it all wrong…

To help cut through the noise and get a more balanced picture of devaluation’s causes, effects and possible ramifications, I chatted with our resident Asia expert Xian Liang, portfolio manager of our China Region Fund (USCOX). Below are some of the highlights.

As you know, we follow currencies very closely in our investment team meetings because we’re aware that government policy is a precursor to change. Having said that, why did China decide to devalue the renminbi?

There are several possible reasons, the first one being economics—specifically, to stimulate economic growth and ease liquidity in the financial sector. A weaker renminbi can help make Chinese exports cheaper for foreigners and imports dearer for locals, creating the incentive for a “net inflow” of money. July data shows that economic activity remains worse than expected. China’s purchasing managers’ index (PMI) reading for the month is one example, but fixed-asset investments, power generation and exports were all down. 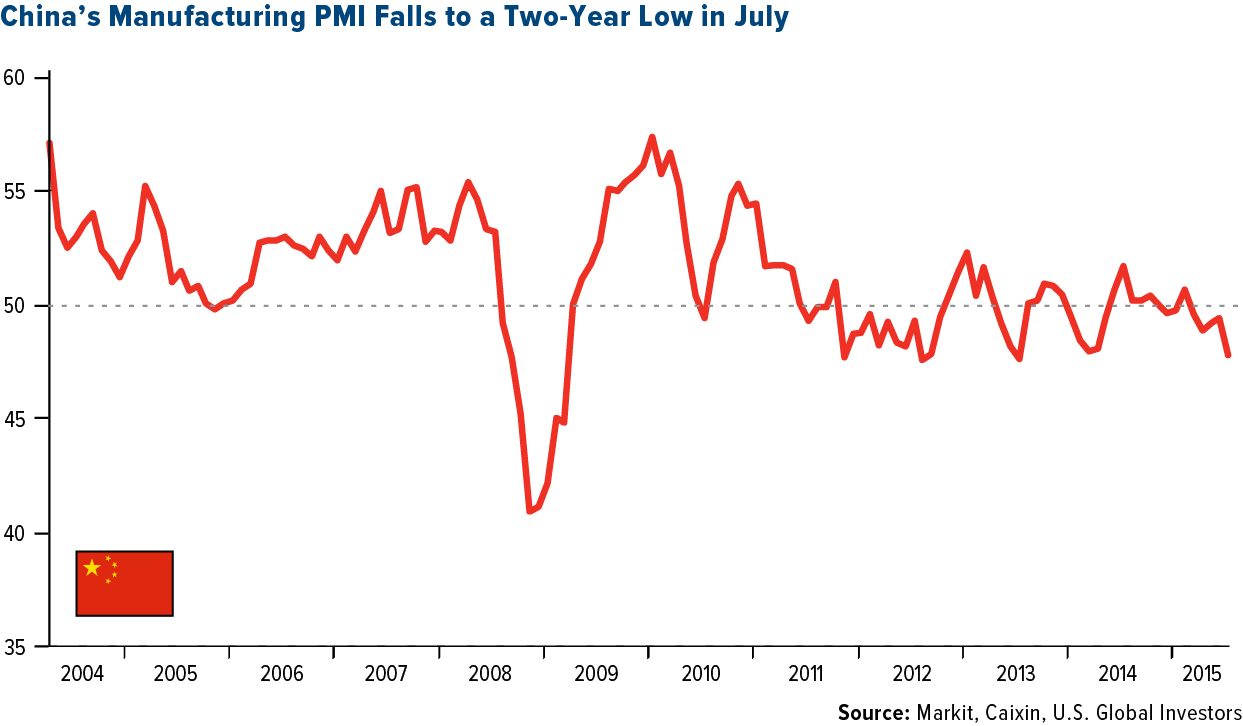 Deflationary pressure also intensified in July, and the renminbi in trade-weighted terms—that is, against a whole basket of major trading partners’ currencies, not just the dollar—has soared to record highs. This is because of a de facto peg to the dollar, making Chinese goods and services uncompetitively priced to world customers.

Another reason is domestic politics. Chinese policymakers want to resurrect their reformist image among domestic intellectuals and the middle class by yielding more power to market forces to determine its currency exchange rate, which offers some compensation for July’s aggressive, command-and-control intervention in the A-Share market.

And then there’s international politics. It’s well known that China wishes its currency to be included in the International Monetary Fund’s special drawing rights basket, along with the U.S. dollar, euro, British pound and Japanese yen. Chinese policymakers are actively demonstrating to the IMF their commitment to “a more market-determined exchange rate,” a critical step toward eventual renminbi internationalization.

Many countries have devalued their currencies lately—Japan, Germany, France and others. Business Insider, in fact, just shared a Goldman Sachs chart showing how miniscule the renminbi’s depreciation really is compared to other emerging countries’ currencies. And yet China gets singled out in the media! Why is everyone so hard on China? 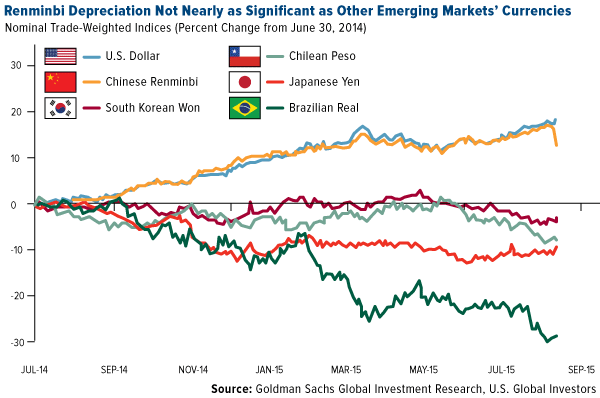 What’s usually not mentioned in all the news and editorials we’ve seen is that China hasn’t resorted to currency devaluation in 20 years. For the last decade, the renminbi was largely moving in a single direction—up—because China was tired of being dubbed a currency manipulator and it would like to foster consumerism.

As the second-largest economy in the world, China is interested in transforming its growth model from investment-driven to consumer-driven, and some investors might wonder how the devaluation will affect consumption. Today, the richer Chinese middle class is made up of big spenders, both home and abroad, and a weaker renminbi translates to weaker purchasing power for them. It might also have larger implications for global tourism, global consumer goods and global property. So the difference between China and, say, France is pretty significant. 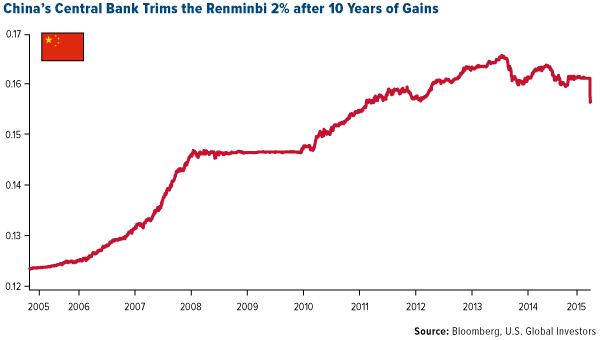 A lot of people think the Federal Reserve will hike interest rates this year—maybe even as early as September—though I’ve expressed doubts about that. Will the devaluation have any effect on the Fed’s decision?

To the extent that it weakens its own currency, China exports deflation to the U.S. and can help the dollar’s strength. Lower inflation and a stronger dollar reduce the incentive or rationale for any imminent Fed rate hike. So yes, you can almost say this is China’s silent protest against the widely anticipated September hike. China seems to be reminding Janet Yellen that in today’s interconnected world, unilateral monetary policy action by the U.S. without first considering global dynamics might not be the smartest thing to do. In effect, it’s saying: “Here’s a preview of what could happen if you insist on hiking rates this year.”

Is this a sign of further reforms? What else can we expect?

The devaluation does indeed herald back to the days of major Chinese reform. In fact, it occurred one day after China approved a comprehensive plan to reform its state-owned enterprises to make them more market-driven, similar to those in Singapore. So at least the government welcomes the perception that the devaluation has more to do with long-term structural reform and less to do with short-term expediency.

Investors are being bombarded with bad news about China right now. There have been some very negative headlines. Where’s the good news in all this?

Here’s the simple answer: A weaker currency not only helps Chinese exporters but also U.S. consumers. Whether you buy things made in China or are planning your next vacation there, you’ve got money to save now. Opportunities have also been expanded for U.S. retailers and manufacturers that source from China, not to mention U.S. airlines. And if you’re in the camp that believes this devaluation is the start of a new “currency war,” then it might be time for gold to shine.

Indeed, gold tends to benefit the most when there are global currency fluctuations. Last week was no exception, as the metal had its best week since June. Many analysts, it seems, prematurely declared that gold has lost its safe haven status because it fell to five-year lows during the height of Greece’s and Puerto Rico’s debt crises.

But as I explained last month, gold is behaving this way not because it’s lost anything. Instead, there are external forces at work here, including the strong U.S. dollar, fears of rising interest rates and a slowing global economy, not to mention possible price manipulation. Despite these powerful headwinds, gold managed to hold strong the week before last as media giants’ stock plummeted, erasing $60 billion in stock value.

Speaking of gold and mining, I’ll be in Lima, Peru during the first week in November to attend the Mining & Investment Latin America Summit, where I’m scheduled to deliver the opening keynote address. I’ll be speaking on mining around the world, macro trends and opportunities and challenges in the upcoming year. For those of you interested in attending, you can register here. I’d love to see you there!

To read the full article click on the link at the top of this page.