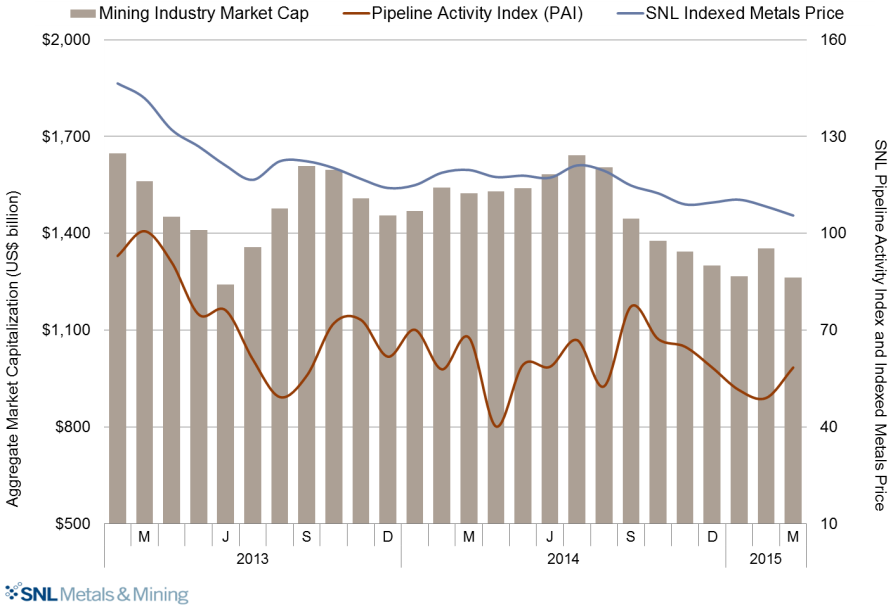 The commodity markets have mirrored a stubbornly slow global economic recovery and the oversupply for many metals. SNL’s indexed metals price fell to 105.5 in March, compared with over 150 at the end of 2012. The price index (May 2008 = 100) measures the relative change of a basket of eight metals, weighted by annual exploration spending.

These commodity prices are reflected in mining equity values, and the 2,700 companies tracked by SNL saw a month-on-month decline of 6.7% in market capitalisation to US$1,263 billion at the end of March. The value of the industry’s listed companies had peaked at US$2,415 billion in April 2011.

There was a jump to six in the number of positive project milestones during March, although this was from the remarkably low base of only one announcement in February. The in-situ resources positively affected were valued at US$9.6 billion, compared with only US$2.7 billion in February. Unusually, there were no negative milestones in March; a welcome relief from the six negative announcements in February, valued at over US$875 billion.

There was also a near doubling to nine in the number of initial resource announcements. The value of these initial resources, using SNL’s methodology, soared to US$16.5 billion, compared with only US$2.7 billion in February.

In contrast, there were fewer significant drill announcements in March, compared with February, and there was also a decline in the number of completed financings in the sector. SNL recorded 18 financings by junior and intermediate companies last month, worth only US$89 million, compared with 21 financings in February, worth US$642 million.