You can’t write off Donald Trump’s chances of becoming the next US President whatever the polls might suggest.  Most polls put Hillary Clinton in the lead – but not by much – and if the battleground states go the way the polls are suggesting it would only take Florida to move from a likely Democrat win to a Republican one to swing the electoral college votes in favour of The Donald.  The latest Realclearpolitics.com electoral map with no ‘toss-ups’ (i.e those states which appear to be tending one way or the other are in as wins for whichever candidate is in the lead at the time) suggests a Clinton victory with 292 electoral votes against Trump’s 246 – it takes 270 to win the nomination.  But, one of the states which is down as a Clinton victory on this basis – Florida with 29 electoral college votes – is far too close to call and seems to be trending in Trump’s direction.  Do the maths.  If Florida ends up for Trump, and the other states stay as predicted, Clinton would end up with 263 electoral college votes and Trump with 275!

Both candidates are hugely unpopular with a large sector of the US public and it may just come down to which candidate’s campaign can get the votes out.  Parallels with Brexit here.  The Exit campaign had more committed voters than the Remain campaign and other polls have suggested that Trump supporters may be more likely to turn out than Clinton ones.  With Bernie Sanders now stating he is an independent, rather than  a Democrat, some of the big numbers who wanted him as the Democratic nominee may well decide not to vote.  That would be a serious blow for Clinton

There’s also the question of the accuracy of polling.  The high profile political, economic and celebrity supporters appear to be almost all anti-Trump.  His candidacy is ridiculed by many supposed opinion-leaders.  Because of this one suspects that a number of people contacted in telephone polls will not like to admit they will be voting for Trump, even though that’s the way they will go.  More parallels with the Brexit polls.  With nearly all the big political and economic guns pressing for a Remain vote it appears that some questioned in telephone polls did not give an honest answer as to which way they would vote because they feared they would seem to be naïve to the poll conductors.  Human nature.  You don’t want to sound ignorant, uninformed or perhaps racist when talking to a stranger.

So don’t be totally surprised if the polls stay roughly where they are now, assuming neither candidate totally disqualifies themselves, but the result comes out differently.

Interestingly, a respected Professor – Alan Lichtman of DC’s American University – claims to have developed a formula of 13 key points which has correctly predicted the last eight Presidential elections.  If the incumbent political party fails to meet at least six of these points, they will lose the election. See article on the CW33.com website: Professor Who Accurately Predicted Last 8 Elections Says Trump Will Win for details of the specific key points in Lichtman’s analysis.  In his view the Democratic party fails on at least six of these.

If Trump were to win, the American political and economic elite will be shell-shocked – not to mention most of the African American and female population of the U.S.A.  Markets will probably be thrown into turmoil in the U.S. – and around the world too – as Trump is seen as both mercurial and unpredictable.  He’s basically a hard-nosed businessman perhaps unsuited to the diplomatic niceties that global leaders expect from other political leaders.  Getting his own way regardless of opposition would be the norm.  Thus a Trump victory would be the biggest Black Swan event of the year and would generate huge global uncertainty.  Gold thrives on uncertainty.  Need I say more.

It takes one back to the episode of The Simpsons TV cartoon where Lisa Simpson becomes President and on entering the Oval Office is informed that the previous President – one Donald Trump – has bankrupted the country.   In any realistic financial terms, if Trump wins he will be inheriting leadership of a nation which is already technically insolvent anyway.  He has already sounded off about the Fed driving America to rack and ruin and could take steps to drastically change the status quo, but whether his remedies might make the current situation better or worse, who knows?

Prior to the UK’s Brexit vote we advised readers to buy gold against the possibility – small though it may have seemed at the time – of the UK voting to leave the EU – not only because we felt the gold price would rise in the aftermath of such a vote, but also that the pound sterling would fall.  Gold would be a wealth protection insurance in such a case, but without serious downside risk attached. if the vote went as the polls were predicting  That proved to be wise advice!

Perhaps now we should suggest that Americans do likewise with a similar potential scenario in sight should Trump come out on top  Resultant uncertainty could drive the dollar down and gold up – which amounts to the same thing in some economists’ minds.  Roll on November 8th and free us all from our uncertainties.

The above is a lightly edited and updated version of an article I have already published on the Sharpspixley.com website

For those who believe that the election of Donald Trump as U.S. President in November is as unlikely as a vote for the UK was to leave the EU – be afraid, be very afraid!  The latest survey of opinion polls in the USA puts the Donald in the lead.  Here are a couple of screenshots from U.S. website realclearpolitics.com, which monitors the latest opinion polls, which show a Trump surge into the lead over Democrat rival Hillary Clinton, following the end of the Republican National Convention and the beginning of the Democratic one. 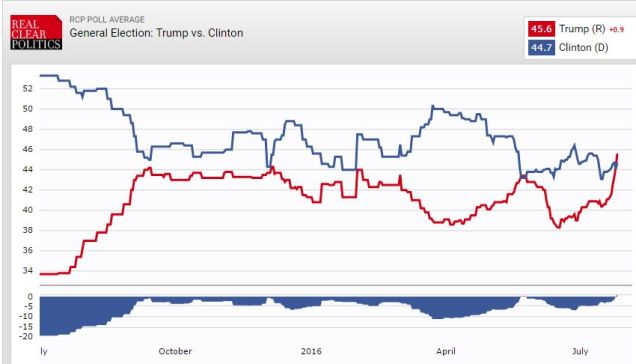 For better clarity in the above chart and table, and for updates click on: http://www.realclearpolitics.com/epolls/latest_polls/elections/

Now there are still a little over three months to go before the US Presidential Election takes place  on November 8th, but for the anti-Trump sector of the US electorate  – which has some  strong demographic parallels with the anti-Brexit voters in the UK, the latest trends have to be extremely worrying.  Although as the UK learnt, polls can turn out to be very wrong in a strongly divided nation.  And this forthcoming US Presidential election is perhaps the most politically divisive yet.

By all logic, Donald Trump’s bombastic campaigning statements should have alienated Women, Blacks and Hispanics alongside died-in-the-wool Democrats which would suggest he is unelectable.  But, in Hillary Clinton, the Democrats have chosen a candidate who is anathema to virtually all Republicans of any gender or race, and may well prove to be equally unpopular with a significant sector of voters who would normally support the Democrat ticket – primarily male blue collar and working class voters.  The US may have been ready for a black leader in President Obama, but are they ready for a woman?

So, as we noted here pre the Brexit vote in the UK, there was sufficient underlying anti-EU feeling in the country to make the eventual outcome decidedly uncertain.  There thus may well be sufficient underlying anti-Hillary sentiment in the US, fuelled by an ongoing, and effective, Republican campaign casting doubts on Hillary Clinton’s financial dealings and past decisions – including the hugely contentious use of her private email account to handle matters of national security – as to her suitability to occupy the Oval office.

Three months is an enormously long time in politics – particularly in one of the most vicious Presidential campaigns ever.  But some mud will undoubtedly stick and the eventual  outcome may well depend on which of the contenders it sticks to most!

As election day approaches, and if the polls still suggest a close race – and in particular if they continue to put Trump in the lead – one should probably expect a strong safe haven move into gold.  The Donald is believed to favour gold and may also be more inclined to review the position of the U.S. Federal Reserve and its policies.  It could be a very interesting three months ahead.

How things have changed in terms of market sentiment towards gold in just a couple of months!  Heading into the end of 2015 virtually every bank analyst was predicting doom and gloom for gold as Fed rate rises would make holding gold less and less attractive.  They were falling over each other to predict ever lower prices – $1050, $1000, $900 or even less.  The only way was down.

There were some marginally conflicting analyses coming out – but only marginal – most seeing a continuing downturn in the first half or three quarters of 2016 but perhaps something of a pickup towards the year end.  But this all made depressing reading for the gold investor despite some fundamental supply/demand factors suggesting that this outlook might have been too pessimistic…

The above are the opening paras from an article I have just published on news.sharpspixley.com   To read the full article click here