The latest weekly gold withdrawal figures from the Shanghai Gold Exchange suggest that Chinese demand is going to get far closer to last year’s annual figure than most mainstream news media would have you believe. (SGE withdrawals are the best available proxy for actual Chinese demand). The latest figure for the week ending December 19th was a large 60.67 tonnes bringing the year to date figure to 2,015.75 tonnes, only 165 tonnes short of last year’s 2,181 tonne record.  With 1 ½ weeks of SGE withdrawal figures still to go until the year end, if withdrawals continue at the current rate it will bring this year’s total to around 2,100 tonnes – only around 4% off last year’s record figure.

It is reckoned, perhaps arguably, that SGE withdrawals equate to total Chinese gold demand – but even if they don’t they do provide an excellent year on year comparison of true Chinese demand figures.  See chart below for comparisons with prior years from Nick Laird’s excellent www.sharelynx.com and www.goldchartsrus.com websites. 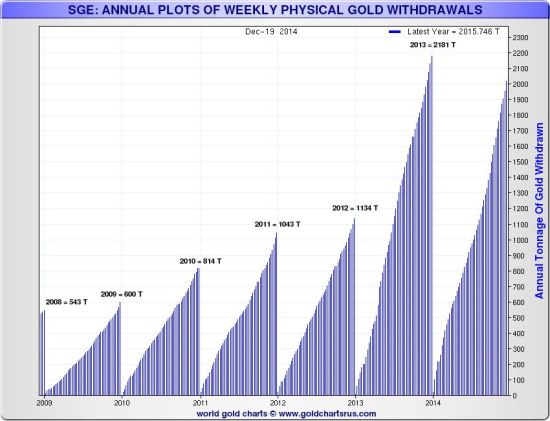 Nick is a close follower of all kinds of global statistics which he publishes in graphical form and he and Koos Jansen on www.bullionstar.com are the most reliable followers of Chinese gold statistics.  Koos will probably see Chinese demand figures as a few tonnes lower as the SGE figures also include movement through the new International section of the Shanghai Exchange (the SGEI) where trade is not necessarily landed on the mainland, but currently volumes are thought to be very small so will make little difference to the overall picture.

Together with the huge recent gold import figures emanating out of India (see: Indian Summer for Gold and Silver.  Can it go on?  and reports of strong demand in European nations where there remain substantial doubts about economic recovery, there seems to be little doubt that currently gold demand is exceeding new supply – possibly comfortably.  There have been relatively high sales levels out of the gold ETFs in recent months which will have helped balance the figures but these have been nothing like last year’s bleed from this source.  With the weaker ETF holders falling away this will become a diminishing source of gold for the world markets.

So it looks as if global gold demand is ending the year on a strongish note.  The gold price yesterday kicked back close to the $1,200 mark after being taken down to the low $1,970s in thin trade just before Christmas.  There does seem to be good support in and around the $1,190s, although a decisive break back above $1,200, while on the cards, is proving difficult to achieve.