The U.S. Mint is on track for the lowest sales of American Eagle coins in almost a decade. The 2008 financial crisis began a historic ramp up in sales that lasted for years. 20,583,000 silver American Eagles sold that year, more than double the 2007 total of 9,028,036 coins. 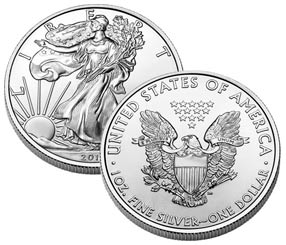 In all but one year thereafter the Mint set a new record. Sales peaked in 2015 at 47,000,000 Silver Eagle coins – 5 times the number sold before the world discovered just how rickety the global financial system actually is.

Memories are short, however, and investor complacency is setting in.

Sales to date in 2017 are just short of 16 million coins and are set to finish the year very close to the 2008 totals.

U.S. Mint sales are viewed as a proxy for bullion sales in the broader market. There isn’t much else available in the way of published data. However, Mint statistics don’t tell the whole story.

While retail buying activity is still stronger than retail selling, we’ve seen a meaningful increase in customer selling of coins, rounds, and bars over the past year. A lot of the American Eagles traded today are therefore resale coins which don’t show up in the Mint’s reporting of new minting activity.

Private mints and refiners are responding to weaker sales by lowering premiums on rounds and bars. The government bureaucrats which run the sovereign mints, including the U.S. Mint, largely ignore these competitive forces. To date, they have not adjusted pricing.

Demand for government-minted products therefore suffers the most as buyers take advantage of significant premium discounts available in other products and secondary market items.

While retail bullion demand in the U.S. is certainly weaker overall, it is way better than the Mint’s statistics might imply. In a sense, the bullion markets are more balanced. National dealers like Money Metals Exchange make more of a two-way market, both buying from and selling to clients.

That is good news for buyers. The days when new production Silver Eagles were strictly allocated and supply fell hopelessly short of demand are behind us, at least for now. Investors can get those coins for around $2.50 over melt value, instead of paying up to $6.00 and waiting for delivery – which has been the case on a few occasions over the past 5-7 years.

Any buyer who doesn’t have to have a sovereign coin will find plenty of other silver products with premiums under a buck – such as rounds and bars. Gold premiums and availability are also improved.

Premiums could go even lower if retail demand does not increase despite the renewed bull market in precious metals that began in late 2015.

Much will depend on spot prices. Many people are impatient with the seemingly gradual rise in gold and silver prices off the 2015 bottom. If prices accelerate upwards, investors will finally start believing in the new bull market.

Perhaps an even bigger variable is the atmosphere of complacency in the markets and how much longer that will persist. Our view is that virtually all markets are severely underpricing risk. More investors should be buying safe-haven assets rather than selling.

It is hard to reconcile the world we find ourselves in today with record stock market prices, at least not without the artificial forces of central bank stimulus in massive amounts and algorithmic trading. Those forces are formidable, to be sure. But how much longer can bankers (both central and Wall Street) forestall the ultimate reckoning for all of their excesses?

Investors asking the same question should take advantage of the buyer’s market in metals while it lasts.