Article written prior to the sharpish turndown in the gold price after the weekend. 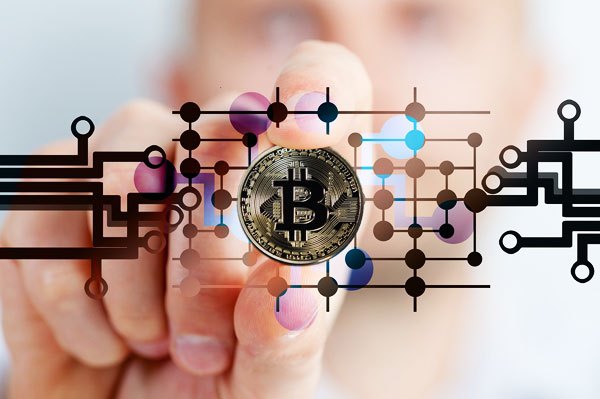 If you’re familiar with ABC’s popular reality show Shark Tank, you should already be familiar with the concept behind the San Antonio Angel Network (SAAN). Select entrepreneurs and innovators pitch their startup ideas to accredited investors, who can choose to make early-stage investments in a potentially successful company.

I attended an SAAN meeting last week at Ferrari of San Antonio, and what struck me the most was how fluid and seamless the whole thing is. Other professionals in attendance, including lawyers and CPAs, had a similar opinion, with some of them saying it was because there wasn’t any bureaucracy or red tape to hamstring the presenters.

This is unlike the world of mutual funds, which I believe has become excessively regulated.

As I’ve said numerous times before, regulation is essential, just as referees are essential to a basketball game. No one disputes that, because otherwise there would be chaos.

Similarly, the new and very unregulated world of cryptocurrencies has grown dramatically, beyond bitcoin and ethereum. Did you know there are over 800 cryptocurrencies? These new initial coin offerings, called ICOs, are like initial public offerings (IPOs) but with little regulation or accountability. As I’ve commented before, if the refs get too powerful or too numerous, and the rules too complex, the game becomes nearly unplayable.

Bitcoin, ethereum and other cryptocurrencies have had a meteoric year, with more than $2 billion raised in ICOs so far in 2017, according to Bloomberg. Approximately $155 billion in cryptocurrencies are in circulation around the world right now. Bitcoin by itself is at $78 billion, which is close to the $90 billion invested in all gold ETFs.

Like gold, cryptos are favored by those who have a deep distrust of fiat currency, or paper money. Money, after all, is built on trust, and the blockchain technology that bitcoin is built on top of automates trust through an electronic ledger that cannot be altered. Every transaction is anonymous and peer-to-peer. The system is entirely decentralized and democratic. No monetary authority can see who owns what and where money is flowing.

This, of course, is a huge reason why some world governments want to crack down on the Wild West of virtual currencies, especially with bitcoin surging close to $5,000 this month.

China did just that last week, putting a halt to new ICOs and crypto transactions. In response, ethereum tumbled as much as 15.8 percent last Monday, or $55 a unit. Bitcoin lost $394 a unit.

China’s decision comes a little more than a month after the SEC said cryptocurrencies are securities and therefore should probably be regulated as such. At this point, though, the implications are unclear.

What’s clear to me—after seeing firsthand how easily and quickly transactions are made—is that there’s no going back. It’s possible cryptocurrencies will one day be regulated. But I’m confident bitcoin, ethereum and some other virtual currencies offer enough value to weather such a potential roadblock.

I also believe there has to be a happy medium between the excessively regulated fund industry and the potential chaos of the cryptocurrency. This is what I witnessed at the SAAN event I mentioned, which allowed the professionals in attendance to gain information, ask questions and make informed decisions.

Speaking on cryptocurrencies last week, Mark Mobius, executive chairman of Templeton Emerging Markets Group, said gold could be a beneficiary of China’s decision to clamp down on ICOs. As more governments and central banks turn their attention to virtual currencies, investors could move back into the yellow metal as a store of value.

That’s a possibility, but I think gold’s price action right now is being driven by negative real Treasury yields and fears over a potential conflict with North Korea. Adjusted for inflation, the two-year and five-year Treasuries are both currently yielding negative amounts, and the 10-year continues to fall closer to 0 percent. 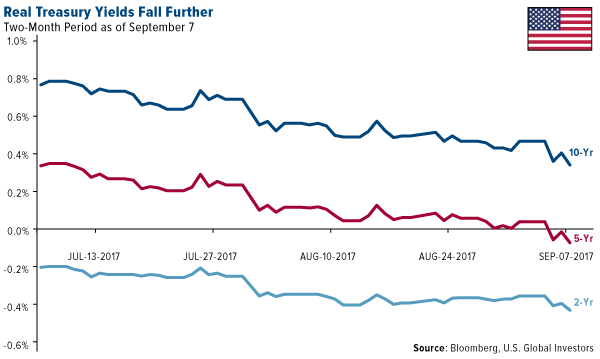 As I’ve explained numerous times before, gold and real interest rates share an inverse relationship. It makes little sense to invest in an asset that’s guaranteed to cost you money—which is the case with the two-year and five-year government bond right now. Investors seeking a “safe haven” might therefore add to their weighting in gold, especially with North Korea’s Kim Jong-Un raising tensions.

The yellow metal closed (last week) above $1,350 an ounce, more than a one-year high – (but has come down quite sharply this week as some of thge geopolitical fears eased – temporarily perhaps? – Editor).

Similarly driving the gold Fear Trade are concerns over the national debt. Last week President Donald Trump sided with Congressional Democrats in raising the federal borrowing limit to allow Hurricane Harvey recovery aid to pass. An initial package of $7.85 billion for Harvey victims was agreed upon, but with total costs expected to be as high as $190 billion—more than the combined costs of Hurricanes Katrina and Sandy—and with Hurricane Irma the federal aid amount could eventually run even higher.

Trump partially ran on reigning in government spending, which I and many others would like to see. Even so, this might not be enough to control our runaway debt. According to an August report by the Congressional Budget Office (CBO), debt will likely continue to grow as spending for large federal benefit programs—Social Security, Medicare and the like—outpaces revenue. Interest payments on the debt will only continue to accelerate as well.

Below is a chart showing national debt as a percentage of GDP going back to the founding of the U.S. Although we’ve seen periodic spikes in response to national crises, the debt could soar to unprecedented levels within the next 10 years.

Financial writer Alex Green, the Oxford Club’s chief strategist, told me during my recent interview with him that he thought out-of-control spending posed a greater threat to our country than even North Korea.

I tend to agree with him, and that’s why I believe that investors should have a 10 percent allocation in gold, with 5 percent in bullion and 5 percent in gold stocks, mutual funds and ETFs.