The Bigger the Base, the Greater the Upside Case. This saying among technical analysts/chartists helps define where we are today in the precious metals – and where we’ll soon be headed.

It means that when prices “base” in a relatively narrow sideways range for an extended period, they will at some point break out. Before the action gets underway, bears and bulls alike will get “sandpapered” as they take positions, trying to guess whether or not the price is getting ready to decline further or move upward into a new bull phase.

If you consider that time spent in sideways consolidation represents a build-up in stored energy, then a valid upside breakout will be propelled by a lot of buying fuel as old shorts who bet on lower prices offset their losing positions and new longs jump in to get onboard the change in trend. 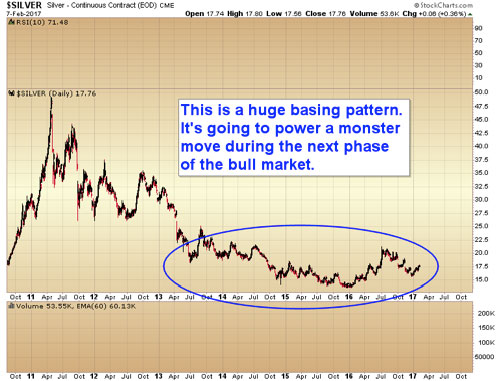 This frustrating sideways movement is not taking place in a vacuum.

Bankster manipulation, algo-trading, “fat finger” futures markets’ whip-saw behavior, and price chasing in both directions becomes a regular feature of the trading landscape. A long time goes by with neither side having enough trading power to break out of congestion.

This takes place concomitant with the central banks’ war on cash, currency and trade manipulation, and geo-political brushfires stacking up around the globe. Ongoing strife in Syria, possible war with North Korea and flash points in the South China sea may be classed as severe “low-probability events, but as Jim Rickards says, when taken in total, it becomes highly probable that at least one of them will ignite a crisis, possibly starting a chain-reaction with the others.

At some point prices jump the rails, catching most by surprise. By the time the picture clears and Mr. Market decides to provide us with some answers, it’s usually too late to climb aboard. 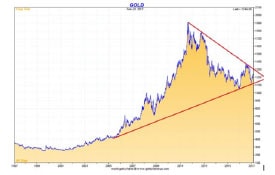 Given the powerful seven-month rally during the first half of 2016 notwithstanding (followed by a more than 50% give-back over the past year), a lot of gold and silver bugs can be forgiven for coming to believe that they will never see a meaningful, sustained resumption of the exciting days of 2005-6, 2009-11 and early 2016.

The feeling of being either “worn out or scared out” – as David Morgan likes to characterize the patience-testing during an extended cyclical bear market wave – has caused more than a few people to sell back their insurance and investment positions in the metals. I believe this is a decision that – sooner rather than later – they will come to seriously regret.

Make no mistake. The government is not here to help you.

Steward Dougherty, in the essay, Currecide: The Globalists’ Planned Annihilation of Your Savings and Freedom states:

Its (gold) going ballistic, is probably better set-up right now than at any other time in history, for a large number of reasons… I continue to think that cash elimination is the biggest story out there. It is a fraud of epic proportions, and its implications are dark and deeply disturbing… Sometimes, you have to say something five times before people say, “Wow. This is important. I better do something about it.” If people decide to “do something about it,” they are going to find that their options are limited. Gold being one of the few of them.

Gold demand would go nuts if only the people could finally understand why they need to buy it right now… I think the dam of realization is coming very close to breaking, and that there could be an outright flood of new, popular awareness and action (my underline).

A Greek financial golden age? Looking at the pathetic financial state of Greece today, it’s hard to imagine that there was ever a time when financial acumen was a trait of which they could be proud. Does the following sound even remotely like what we’ve got going on now – just about anywhere around the globe?

When the Athenian treasury was audited in 440 B.C., it showed a surplus of over 9700 talents – a common unit of measurement for gold and silver during those times. Using current precious metals’ values, aligned with the 14:1 silver/gold ratio favored by the ancient Greeks, those 9700 talents would be the equivalent today of around $700 million!

Says Simon Black, writing in Sovereign Man, “At the time, Athens boasted a population of around 43,000 citizens and 28,500 foreign residents… so on a ‘per capita’ basis, the ancient Athenian surplus amounted to just under $10,000 per person in today’s money. If you compare this figure to our modern world, it’s pretty extraordinary.”

Of the 5 classifications of estimated metals’ holdings for a given project or property tallied for a formal NI-43 101 Report, the most reliable are found in the “Reserve” category, the subsets of which are “Proven” and “Probable”. Everything else being equal, these two listings show what management believes – backed by a variety of exploration methods – have the highest probability of being economically feasible. 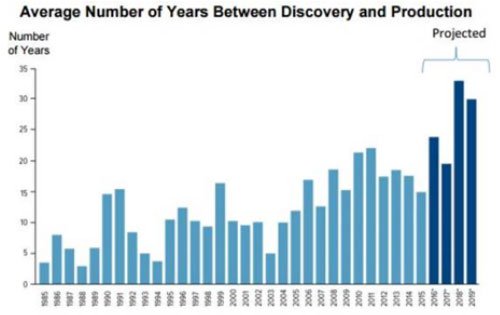 Discoveries, reserves, and grades (grams/tonne) are in steady decline.

For well over a decade, the grade (grams/tonne) of gold produced has been steadily declining. Since 2013 listed reserves, as well as absolute production itself looks to have peaked. And now it’s taking years longer just to bring a new discovery into operation. Toss increasing demand into the mix, and the math points in only one direction – higher prices.

It’s not easy to buy metals when they’re trading sideways to down.

It’s taken a lot longer for us to reach “the promised land” of sustainably higher gold and silver prices than most anticipated. Yes, the herd is throwing money at the DOW and the S&P, assuming they will grow indefinitely to the sky. Yes, with all these things considered, it’s difficult to start or continue accumulating precious metals. And the charts have only recently begun to suggest a change. But…

When things look this way and you feel like going with the herd and maybe stepping in what it leaves behind, recall once again Rick Rule’s famous (and profitable) investment cautionary, “You can either be a contrarian… or road kill.” Could his “investing rule” make your decision to “keep on stackin’” a bit easier?

Warren Buffet has without a doubt, been one of the pre-eminent investors of the modern era. As you read the following quote, replace the term “stocks” with “precious metals.”

“To refer to a personal taste of mine, I’m going to buy hamburgers the rest of my life. When hamburgers go down in price, we sing the ‘Hallelujah Chorus’ in the Buffett household. When hamburgers go up in price, we weep. For most people, it’s the same with everything in life they will be buying – except buying stocks. When stocks go down and you can get more for your money, people don’t like them anymore.” – Fortune Magazine: “The Wit and Wisdom of Warren Buffett.”

The clock is ticking. The ducks are lining up. Are you paying attention? Do you have a plan? Are you working your plan…?

David Smith is Senior Analyst for TheMorganReport.com and a regular contributor to MoneyMetals.com. For the past 15 years he has investigated precious metals’ mines and exploration sites in Argentina, Chile, Peru, Mexico, Bolivia, China, Canada, and the U.S. He shares his resource sector observations with readers, the media, and North American investment conference attendees.

3 thoughts on “Be pepared for Historic Gold and Silver Run”