A new day is dawning for precious metals. Gold and silver – the world’s oldest money – are “connecting” with the newest money, digital cryptocurrencies. The final outcome of this nexus is unpredictable, but it is foolhardy to ignore what is taking place.

Central governments around the globe have waged, against their own citizens, a virtual “War on Cash.” Efforts by Sweden to become “cash-free;” progressive “downsizing” of Eurozone currency units; a currency recall in India that affected 1.3 billion people; solemn talk about eliminating $100 and even $50 bills in the U.S. – all in the supposed fight against “drug dealing and tax evasion.”

Will Ben Be Going Bye Bye?

The War on Cash goes hand in hand with the imposition of onerous taxation levels, negative interest rates, and destruction of what little privacy we have left.

Historically, nations backed their paper currencies with gold and/or silver. Today – without a single one doing so – it might seem, as some naysayers have observed, that gold is at best a “barbarous relic;” at worst, just a “pet rock.” And yet…

The War on Cash has unleashed a hydra. From the invention less than a decade ago of the “cryptocurrency” Bitcoin, to its present-day evolution, a change of monumental significance is underway.

The Foundation Is the Blockchain

Satoshi Nakamoto is credited with the creation of Bitcoin and as part of its implementation, devised the first blockchain database. By definition, a blockchain “allows connected computers to talk to each other, rather than through a central server. Using a ‘consensus mechanism’ the connected computers on the network stay in sync and agree with each other.” Every data entry references an earlier one, agreeing with the entire chain. (Summary from an essay by Peter van Valkenburgh.)

Three years ago, David Morgan aired his views in an essay titled, “My Two Bits about Bitcoin.” The technology was complex, relatively slow, and looked to become unwieldy. This was 15 months before the debut of a process that now holds the potential to turn night into day for just about any kind of online commercial transaction… and could spark a revolution for the use of “digital gold and silver.”

The key (for now) is Ethereum. Ethereum is a computing platform – and a cryptocurrency… that runs smart contracts – applications that run exactly as programmed without the possibility of downtime, censorship, fraud, or third-party interference (ethereum.org).

The Potential and the Promise

Acceptance of gold and silver as a store of value and medium of exchange most likely pre-dates recorded history. Then someone (the Chinese?) got the bright idea to create a paper substitute exchangeable for, but still backed by, precious metal.

In Venezuela, one ounce of gold buys a house.

This worked swimmingly until they decided to print unlimited amounts of what David Morgan at The Morgan Report has so famously termed “paper promises.” These promises are never fully honored, causing the eventual decline of a circulated currency’s purchasing power to zero.

The original promise of value is accepted in good faith, but when that promise is broken through devaluation, faith evaporates, along with the value of the once-supported currency. For proof of this today, look no further than Venezuela.

A number of firms work to merge cryptocurrencies with physical gold and silver. The weakness of purely digital money is that it is unbacked by anything tangible. It only works for people who have electricity and are connected to the Internet. Physical gold and silver don’t rely upon the grid and can never be “hacked.”

Cryptocurrencies such as Bitcoin cost almost nothing to transfer around the globe and they promise to be easy to transact with (akin to using a credit card). If those digital tokens can be anchored to tangible gold and silver bars, they could be more compelling as a store of value.

As you read the following passage in italics from an interview with Beautyon, editor of bitcoin-think, conducted on lfb.org., try substituting the term “digital metals” wherever you see “bitcoin.” Doing so shows the potential, the promise, and very possibly – eventual reality – for the evolving union of digital metals with physical gold and silver.

Bitcoin will succeed. There is nothing any government can do to stop it… No amount of time can put the Bitcoin genie back in the bottle…. (it) is good money, and all the State can produce is bad money… Bitcoin means the final death of government fiat money. It means the end of Big Government. It means an era of unprecedented prosperity, as savings once again become the source of investment.

Will the Promise Be Honored?

The keys to the argument are that when a person purchases digital metal, it must be stored in a secure location, in physical form of a stated purity, immediately available to its designated owner upon demand. It is not being loaned to others. The price is transparent, accurate, and available globally. 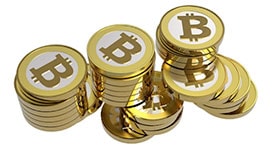 Even though this is a nice image, remember that Bitcoin itself is intangible.

The “authorities” have always sought, and will continue to try to control, peoples’ activities. But to the extent that investable physical gold and silver are removed from the control of exchanges and government coffers, and placed under “supervision” of the individual, the ability to manipulate the price and physical supply will deteriorate.

This, I believe, is the potential that digital metal represents. It will operate on a decentralized, secure, transparent platform. The blockchain and the portal through which it flows could be Ethereum or a similar protocol.

And if the “promise” is not honored? Then the concept of digital metal will be dispatched to irrelevance in the dustbin of history, as other experiments which have toyed with its essence have been. But pass or fail, no amount of digital tinkering will be able to stunt demand for gold and silver. Rather, the result will have simply been to introduce millions of new holders to the virtues of physical precious metals ownership.

Global governments, having previously removed metals’ backing from the currencies they print, now attempt to force their citizens into holding only digital paper currency “wealth.” How ironic it will be, if by these very actions, the ultimate effect turns out to be the unleashing of new demand waves for digital metal – redeemable for physical gold and silver.

“Going forwards, India-China operated digital gold wrapped in blockchain technology will be the undisputed currency of the world gold community, a 3-billion-person-strong titanic force…. This is the beginning of the end for world gold price manipulation, and you can take that to the bank.”

David Smith is Senior Analyst for TheMorganReport.com and a regular contributor to MoneyMetals.com. For the past 15 years he has investigated precious metals’ mines and exploration sites in Argentina, Chile, Mexico, Bolivia, China, Canada, and the U.S. He shares his resource sector observations with readers, the media, and North American investment conference attendees.

2 thoughts on “The Blockchain: A Gold and Silver Launchpad?”