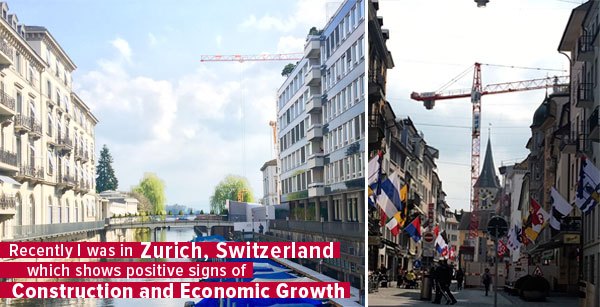 Last week I returned from Zurich, where I spoke at the European Gold Forum. Investor sentiment for the yellow metal was particularly strong on negative real interest rates and heightened geopolitical uncertainty in the U.S., Europe, Middle East and South Africa. A poll taken during the conference showed that 85 percent of attendees were bullish on gold, with a forecast of $1,495 an ounce by the end of the year.

The upcoming presidential election in France is certainly raising concerns among many international investors. On one end of the political spectrum is Marine Le Pen, the far-right National Front candidate who, if elected, might very well pursue a “Frexit.” On the other end is Jean-Luc Mélenchon, a socialist of such extreme views that he makes Bernie Sanders look like Ronald Reagan. I was shocked to read that Mélenchon has pledged to implement a top tax rate of 100 percent—and even more shocked to learn that he’s moving up in the polls. An insane 100 percent tax rate would surely return the country to medieval-era feudalism, which is just another name for slavery. All the wealth naturally goes to the very top, and corruption thrives.

It’s important to recognize that in civil law countries such as France, hard line socialism is much more likely to take hold. Just look at South Africa. While in Zurich, I had the pleasure to speak with Tim Wood, executive director of the Denver Gold Group and former associate of South Africa’s Chamber of Mines.  According to Tim, the poor government policies of South Africa’s socialist president, Jacob Zuma, is driving business out of the country and has led to the resignations of several members of parliament. Tens of thousands of protestors have taken to the streets of Johannesburg demanding Zuma to step down, especially following his firing of Finance Minister Pravin Gordhan. The rand, meanwhile, has plummeted and the country was recently downgraded to “junk” status

One of the consequences of a weaker rand has been stronger gold priced in the local currency and higher South African gold mining stocks, as measured by the FTSE/JSE Africa Gold Mining Index. Among the gold companies that have seen some huge daily moves in recent days are Sibanye Gold and Harmony Gold.

South African gold stocks look very attractive in the short term. Over the long term, however, producers might find it increasingly difficult to operate efficiently and profitably in such a mismanaged jurisdiction.

And on Friday we learned the U.S. added only 98,000 jobs in March, down spectacularly from the 235,000 that came online in February. In response to this and the Syrian air strike, gold jumped more than 1 percent, touching $1,272 in intraday trading, its highest level in five months.

Fresh purchasing manager’s index (PMI) readings for the month of March were also released, showing continued manufacturing sector expansion in the world’s largest economies, including the U.S., China and the eurozone. All of Zurich was under construction, it seemed, with cranes filling the skyline in every direction. And when I flew back into San Antonio, sections of the international airport were also under heavy construction. This all reflects strong local and national economic growth in Switzerland and the U.S.

The official China PMI rose to 51.8, the fastest pace in nearly five years. Because the PMI is a forward-looking tool, this bodes well for industrial metals, as measured by the London Metal Exchange Index (LMEX). The Asian giant, as I’ve pointed out before, consistently ranks among the top importers of copper, aluminum, steel and more. 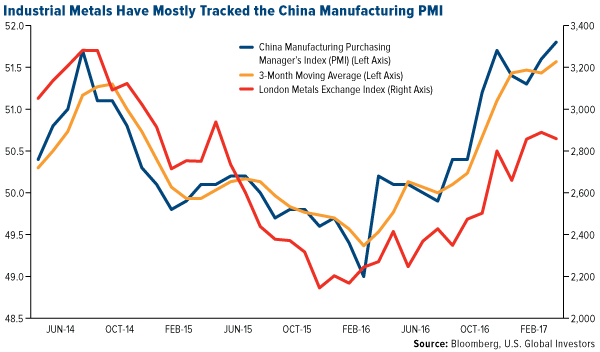 The U.S. Manufacturing ISM cooled slightly to 57.2, down from 57.7 in February. This still remains high on a historical basis. Because the U.S. is the number three producer of crude, following Russia and Saudi Arabia, oil prices have tended to track the country’s manufacturing index. 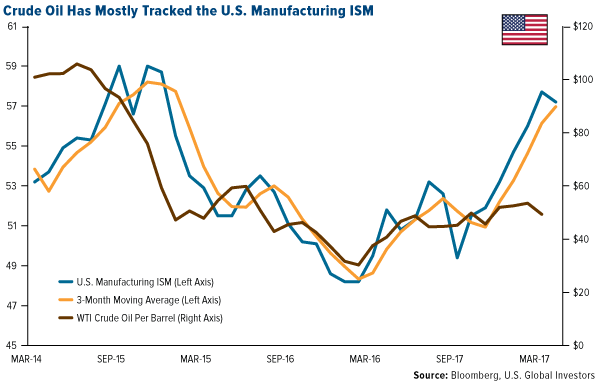 Again, Trump met with China’s Xi, a man who can be considered the U.S. president’s counterpart in many more ways than one. In February, I included Xi in a list of four global leaders who have more in common with Trump than some people might realize. Last week the Brookings Institute compiled a list of the many “striking similarities” between the two men. Among other commonalities, they’re both nationalists; they’re both populists and have expressed a desire to fight corruption; they both have a rocky relationship with the press and intellectual community; and they both prioritize domestic affairs over foreign affairs.

None of this stopped Trump from being very critical of China on the campaign trail. He threatened to name the country as a currency manipulator and raise tariffs as much as 35 percent. It will be interesting to see what agreements, if any, can come out of this meeting between the two leaders.

Trump is not wrong to raise the alarm over U.S.-China trade. In 2016, the U.S. trade deficit with China stood at a whopping $347 billion. This is down slightly from $367 billion in 2015, but still a huge number. If you look at the total U.S. balance of payments since 1960, you get an even greater sense of the imbalance. 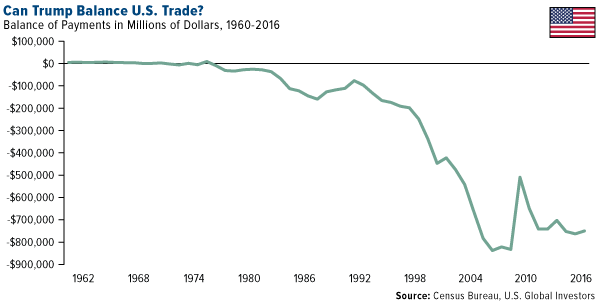 At the same time, world trade volume growth has improved in recent months, especially in emerging markets and Asia. 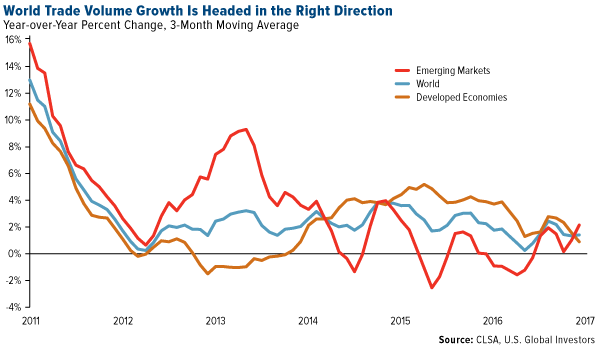 It’s important that Trump puts ample thought into improvements in international trade. I’m not convinced tariffs and border adjustment taxes (BATs) are the solution. Look at what happened in the 1930s with the Smoot-Hawley Tariff Act. In an effort to “protect American jobs,” the U.S. raised tariffs on more than 20,000 goods coming into the country, many of them as high as 59 percent. Once the act went into effect in June 1930, a trade war promptly ensued and global trade all but dried up. Today, historians almost unanimously agree that the policy, which President Franklin Roosevelt later overturned, only exacerbated the effects of the Great Depression.

One of the biggest reasons why the U.S. has such a trade deficit is due to its abnormally high corporate tax rate. The country’s largest export is intellectual and human capital. Think Apple and Google, which are designs and ideas. The problem is that the dollars received in exchange for these goods and services are sitting in Ireland, or elsewhere, and are thus not counted in the official trade balance. Should the corporate tax rate decline to an average of around 18 to 20 percent, which is consistent with other developed countries, U.S. multinational companies would likely be more inclined to repatriate those profits and tilt the balance back in America’s favor.

Tax reform, therefore, is key in making sure the U.S. remains competitive on the world stage.

One thought on “Zurich Conference Positive on Gold”