The latest gold import and export figures into and out of Switzerland both showed huge increases in December with exports to China a particularly notable 158 tonnes compared with a rather small 30.6 tonnes in the previous month.  With gold flows into the Chinese mainland from Hong Kong also picking up in December this represents pre-Chinese New Year holiday demand and may also have been boosted by the lower gold prices prevailing in the final quarter of 2016.

Switzerland has always been a major conduit for gold flowing into stronger Eastern hands.  That into China for example stays there and doesn’t come out again.  The private Swiss gold refineries, Valcambi, Metalor, Pamp and Hereaus all specialise in re-refining gold scrap and 400 ounce good delivery gold bars into the smaller, mostly kilobar, sizes in demand in the Middle and Far East.

But most significant in the latest figures were the exports recorded to China of 158 tonnes – and given that China imports gold directly from a number of other sources too – this suggest a huge pick-up in Chinese demand at the end of a particularly weak year.  We have already pointed to a sharp fall in Shanghai Gold Exchange (SGE) gold withdrawals over the year (See:  2016 SGE gold withdrawals lowest for four years) which is symptomatic of the same overall reduction in gold demand in China over the full year, but whether the big rise in December imports from Switzerland is purely due to demand ahead of the Chinese New Year, or is gold price-related following the dip in US dollar bullion prices immediately following the US Independence Day holiday in July, is uncertain – but probably a combination of both. 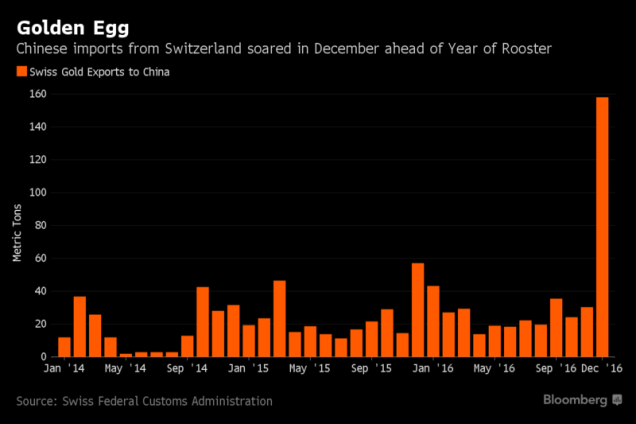 The above graphic from bloomberg.com demonstrates the huge increase in Chinese gold imports from Switzerland in December.