While this website primarily covers the precious metals we diverge on occasion into other commodities and in this respect our concentration on price gains in gold and silver in particular have meant we have missed the big recoveries in some other metal and mineral commodity sectors too.  Indeed it took Frank Holmes’ review, and his ‘periodic table’ of H1 commodity performance to show how well some of these have been performing almost as well as silver – still the H1 leader in price gains – over the first half of the year.  In actuality it is almost certainly a case of these commodities being heavily oversold in last year’s big downturns, but it is worth noting that invariably such downturns are overdone with momentum carrying prices down way below levels justified by the true supply/demand equation. 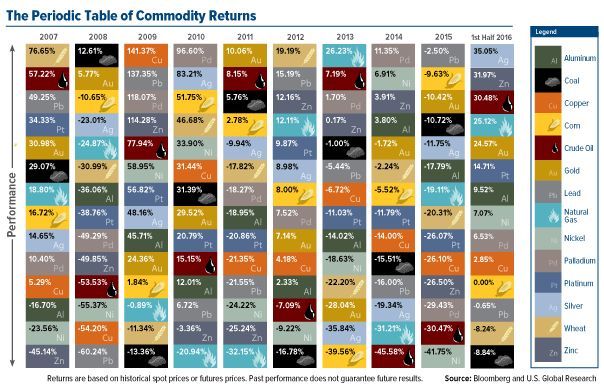 The H1 ‘Periodic table’ shown above from U.S. Global Investors shows in no uncertain terms how volatile the sector can be over the years with the top and bottom performers switching around almost on an annual basis.  And what it shows for H1 2016 is that although silver was, as we have noted beforehand, the top performer to date with an H1 price rise of 35%, zinc put on nearly as much at 32%, with oil and gas (hugely oversold last year) knocking gold into only 5th place with respective gains of 30%, 25% and 24.5%.

Zinc does have additional relevance in a focus which is primarily on precious metals as most primary silver producers also mine zinc (and lead) in relatively large quantities as well with the three metals invariably occurring together.  So the rise in zinc prices will have had an additional booster effect on the fortunes of most of the primary silver producers.  Similarly most primary zinc mines will also be producing silver as a byproduct.

Indeed the supply/demand situation for zinc has caused many commodity analysts to tip zinc and zinc miners as having strong investment potential over the past few years, but until this year the metal has not performed as the analysts had predicted.

Their premise had been one on likely major disruptions in the supply/demand balance with two of the world’s biggest zinc mining operations coming to the ends of their profitable lives, and no major new producers coming on line to replace what was assumed would be a significant supply shortfall.  In retrospect the Chinese industrial downturn threw some of the demand parameters into disarray and last year, for instance, zinc was one of the worst performing commodities, falling in price over the year by around 26.5%.

As Holmes pointed out in his accompanying article – Silver Takes the Gold: Commodities Halftime Report 2016  – this dynamic certainly helped   boost the zinc price so far this year. He noted that during the first four months of the year, mine production fell 8.1% from the same time a year earlier due to declines in Australia, India, Peru and Ireland.   The straw which may have finally broken the camel’s back was that Vedanta Resources made its last zinc shipment from its Lisheen Mine in Ireland, which for the last 17 years had produced an average 300,000 tonnes of zinc and 38,000 tonnes of lead concentrate per year.

This has been coupled with an expected increase in the demand the demand for refined zinc expected to increase 3.5% this year. A large percentage of this growth can be attributed to China, which is still investing heavily in infrastructure, even as money supply growth has slowed.  But the other big factor has probably been record automobile sales in the U.S. and China, the world’s largest automobile market, recording the sale of 10.7 million vehicles in the first five months of the year –  an impressive year-over-year increase of 7%.

In terms of oil and natural gas, the other two big gainers this year, as is usually with such market moves they were almost certainly sold down more than they should have been last year as the media and analysts fell over each other to predict further declines – more on momentum perhaps than real supply/demand data.  But, the aforementioned climb in automobile sales coupled with some significant falls in output, have presaged a very strong recovery in crude oil prices.  As Holmes pointed out: “Unplanned production outages in Canada, Nigeria, Iraq and elsewhere removed a collective 3.6 million barrels per day off the market in May alone. Coupled with ongoing declines in the North American rig count—U.S. crude production is now at a two-year low—this helped nudge prices up to levels not seen since July 2015… At the same time, global consumption is expected to increase by 1.5 million barrels a day both this year and next, according to the U.S. Energy Information Administration (EIA), with North America and Asia, particularly China and India, responsible for much of the growth.”

Much as the precious metals complex tends to be dragged up by movement in the gold price, natural gas tends to benefit from movement in crude oil prices which probably accounts for gains here, although again the decline in fracking activity in the U.S. on economic grounds given the low gas prices will not have hindered here.

The other sector worth commenting on here has been a decent rise in pgm prices – of platinum in particular, although palladium, – continually pushed by the analysts as being the likely best performer in the precious metals  complex has continued to underperform relative to its peers.  In H1 platinum was up 14.7% and palladium only 6.5%.  Both should perhaps have been boosted by the strong automobile sales figures in particular, while some supply disruptions in South Africa will also have contributed.  Both metals are expected to see a supply deficit this year, but the pricing situation is continuing to be undermined due to large stocks of both metals being held out there and possible liquidations out of ETfs.

So while precious metals continue to be the focus of much commodity and equity investment interest, it is worth keeping an eye on some of what might be considered the more mundane metals and minerals.  Like the precious metals, many of these have perhaps been oversold in the downturn years and others could be set for similar big rises.  It’s a question of getting one’s timing right to benefit from these gains.  Copper, nickel and lead have been laggards in any pick-up so far this year and coal remains hugely depressed.  Could we see a turnaround in any of these?  At some stage we probably will as low prices impact supply and, in most cases, annual demand continues to grow.  As noted above timing is everything in commodity investment.