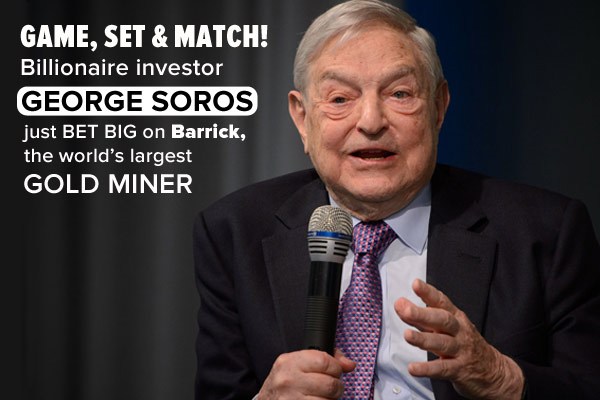 Soros’ investment can be held up as further proof that sentiment toward gold has decidedly shifted positive, following the challenging last three years.

London-based precious metals consultancy Metals Focus just released its Gold Focus 2016 report in which the group calls an end to the gold bear market that began in late 2011, after the metal hit its all-time high of $1,900 per ounce. “We are optimistic about gold over the rest of this year and our projections see it peaking at $1,350 in the fourth quarter,” the group writes. Global negative interest rate policy fears have reawakened investors’ confidence in gold as a reliable currency and store of value.

The group adds: “In the near term, there may well be some liquidations of tactical positions.” This is to be expected, especially around the start of summer, based on historical precedent

Will Gold Follow Its Short or Long-Term Trading Pattern?

We’ve noticed that mining companies which have deleveraged their balance sheets this year have been some of the biggest gainers. Barrick, now Soros’s largest U.S.-listed allocation, started 18 months ago.

Glencore, Teck Resources and higher-risk junior producers such as Gran Colombia bounced off the canvas after being knocked down.

Gold equities always have a higher beta than bullion. Usually a ±1 percent move translates into 2 to 3 percent in gold stocks.

Regardless of it being a bull or bear market, there are still fairly predictable intra-year trends in the price of gold. Below is an updated composite chart of the metal’s historical yearly patterns over the last five, 15 and 30 years, courtesy of Moore Research. 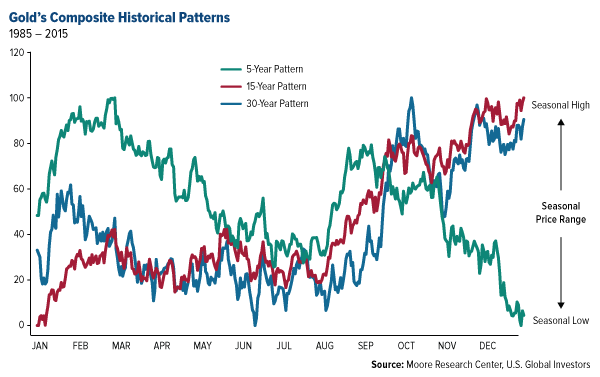 In all periods, gold contracted in May to early summer, then rallied in anticipation of Ramadan—this year beginning June 4—and India’s festival of lights and wedding season. India has one of the largest Muslim populations in the world, and for at least 5,000 years they’ve adhered to the tradition of giving gold as gifts during religious and other celebrations. .

Predictably so, the yellow metal has retreated somewhat this month, following its best start to a year in 30 years and its best-ever first quarter for demand. As I told Daniela Cambone during last week’s Gold Game Film, this pullback provides an attractive buying opportunity

The five-year period decoupled from the other two starting in mid-autumn, but the annual losses in 2013 (when the yellow metal fell 28 percent), 2014 and 2015 skewed the data. Metals Focus sees gold following its more typical trading pattern this year, possibly climbing to as high as $1,350 an ounce 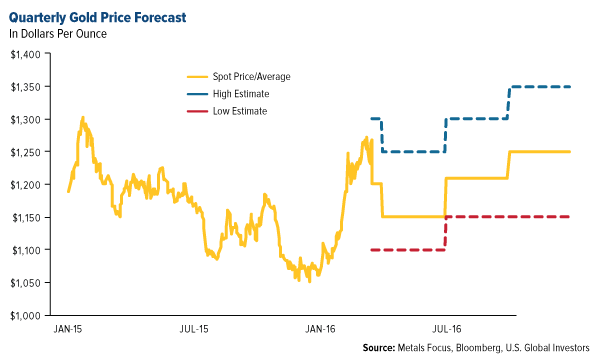 In the near-term, gold is threatened by a rate hike, possibly as early as next month’s Federal Open Market Committee meeting. The metal fell to a three-week low this week on hawkish Fed minutes. If the Fed ends up delaying a hike, it could give gold the chance to take off.

One of the concerns the Fed has right now is the depreciation of the Chinese renminbi. In a special report, CLSA estimates it could fall as much as 25 percent before rebounding somewhat. Because the trade volume with China is so massive, the fear is that it could affect the U.S. economy 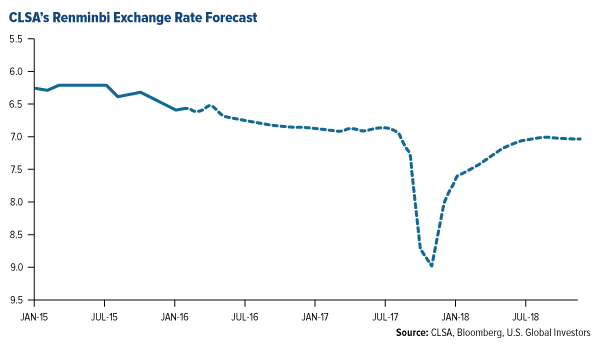 This would have many obvious negative consequences. For one, because China’s oil contracts with the Middle East are denominated in renminbi, not dollars, Middle East suppliers would be hurt.

CLSA points to several winners, however, including investors. The devaluation could very well “represent the best opportunity to buy Chinese assets that investors have had since the financial crisis,” the investment banking firm writes. China’s materials sector, local exporting producers and mainland gold producers should also benefit. The renminbi will “inevitably” fall, CLSA says, “irrespective of economic fundamentals, as a free market works out what it is worth.”

It’s little wonder then that, in the meantime, the country’s consumption of gold has skyrocketed in recent years as it vies to become one of the world’s key gold price makers. (Remember, China just introduced a new renminbi-denominated gold fix price.) 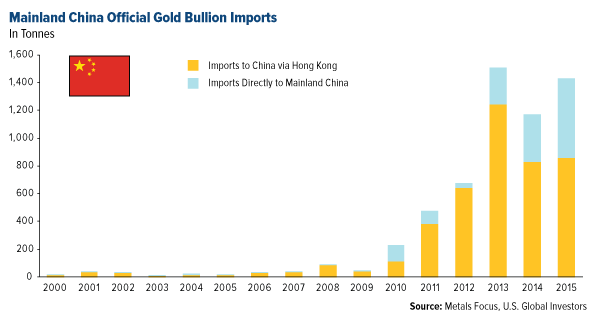 In addition, it was reported last week that Chinese bank ICBC Standard just purchased one of Europe’s largest gold vaults from Barclays, located in London, for $90 billion. This will help give the country greater control over gold transactions around the world, about $5 trillion of which are cleared in London every year

Likely to help gold this summer are geopolitical events, specifically the potential “Brexit” next month when U.K. voters decide on whether to remain members of or leave the European Union.

Various analysts have warned that such an event could trigger a crisis with both the euro and pound, which might spread to other economies. A recentBank of America Merrill Lynch survey found, in fact, that the idea of a Brexit has risen to the top of global investors’ worries. What’s more, no consensus was reached during a meeting among G7 nations this past weekend on how to deal with fiscal policy, other than to take a “go your own way” approach.

In the past, gold has been used as a hedge against the risk of not only negative interest rates but also inflation.

High inflation might also be coming to the U.S. thanks to the Labor Department’s new regulation on overtime pay, which doubles the eligibility threshold from $23,660 a year to $47,476 a year, on condition that the worker puts in more than 40 hours a week. It’s estimated that the ruling will affect 2.2 million retail and restaurant workers, among others.

President Barack Obama’s heart is certainly in the right place by wanting to boost workers’ wages. But it’s important to be aware of the unintended consequences that have often accompanied such sweeping edicts throughout history. We could end up with rampant inflation as companies will have little choice but to raise prices to offset the increased expense. Again, having part of your portfolio invested in gold and gold stocks, as much as 10 percent, could help counterbalance inflationary pressures on your wealth.