As we move through 2016, the Horsemen of the geopolitical, economic, and social apocalypse are on the march.

China burns through its currency reserves as billions in yuan flee the mainland for safe harbor. Japan prints mountains of yen debt in an effort to create inflation – and thereby the conscious devaluation of its citizens’ purchasing power.

Saudi Arabia’s gamble of cutting oil prices to the bone in an effort to break the back of the shale oil industry is becoming so costly that it may have to sell a portion of mighty Aramco to outside investors, while keeping secret the amount of its U.S. debt.

The U.S. government holds an incomprehensible $19 trillion dollar debt, in a presidential election year where the programs offered by front-runners of both parties would increase that amount… by trillions more!

And to top it off, many nations – the U.S. included – are moving to implement a policy of negative interest rates (NIRP), where the bank charges you the customer for the privilege of holding a cash balance! Think about how corrosive NIRP would be. And while that’s going on, the government is actively working to promote inflation – in order to pay its social security and government pension obligations – while your purchasing power continues to decline.

The result of this policy is financial repression. A double sucker punch to your economic gut.

In Europe, NIRP is causing large corporations to hoard cash and buy gold rather than keep a large bank balance. In Japan, home safes, in which to store cash, are being purchased in record amounts, and demand for 100,000 yen (c. $1000) notes is going through the roof. 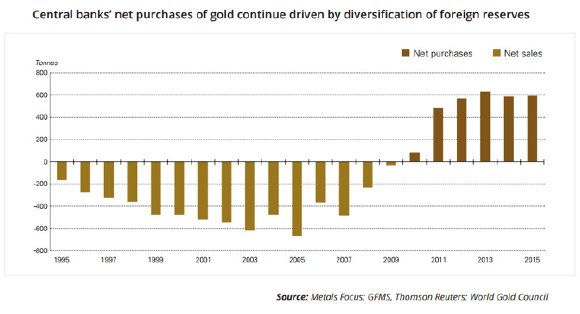 Since 2010, central banks have become net buyers of gold

As the world’s governments come face to face with the prospect of currency collapse, something’s going to give. Confidence in (acceptance of) fiat money is literally all that holds things together.

Let a run out of a country’s paper money get underway – into anything of tangible value – and it’s GAME OVER. Even the ability of banks to suspend redemptions from your money market funds – instituted by federal decree last year – will prove to be nothing more than a metaphorical finger in the dike.

What is to be done? How can the central banks of countries around the globe, as they slip into a synchronized recession (or worse), dig themselves out of the approaching monetary-debt abyss without going through a systemic collapse first? 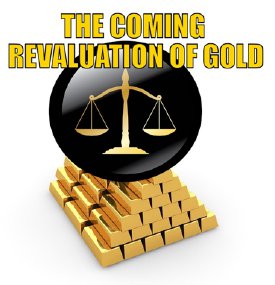 There is an answer… it’s written about occasionally, but scoffed at by virtually every “intellectual” and “economist” who has cared to give its backers the time of day.

That “answer” is born and nurtured through centuries of history in the crucible of economic need: There will be a revaluation in the price of the most powerful, effective, and durable store of value humankind has ever utilized – gold.

Talking heads and politicians like to say, “but there wouldn’t be enough gold for that!” Oh, yes there is… but only at the right price!

Gold revaluation (not monetization – where gold is redeemable in exchange for paper script as a monetary medium), would be instituted by central banks – perhaps first by the U.S. Federal Reserve, with others in tow…

So far, the world’s major currencies have been taking turns devaluing against each other, to improve their country’s trade position in the global economy. It’s mathematically impossible to devalue all currencies at the same time, so as the “currency wars” intensify, the inevitable result is a spiraling race to the bottom.

Jim Rickards, in his recently-published seminal work, The New Case for Gold, shines a light on the way out for these dysfunctional entities, saying:

“..if you devalue it against gold – because gold is money. It’s not the kind of money that can be printed by a central bank… (but) with gold, everybody can devalue (their currencies) at once… It’s eighth grade math.”

In order to derive a per ounce dollar figure at which gold needs to be priced, in order to restore public confidence, and jumpstart inflation – central bank goals – Rickards suggests the following formula:

First take 40% of global money supply (M-I x 40%), then divide this figure by the official gold holdings of the world’s central banks (35,000 tonnes), and you get $10,000 an ounce as a realistic gold revaluation price. This action would stop deflation – a central bank’s worst nightmare – dead in its tracks. And they might not even have to reduce the money supply!

Other thinkers, including Antal Fekete and Hugo Salinas Price, have toyed with a gold figure of between $10,000 and $50,000. Price, who has been a tireless advocate for using the silver Libertad in Mexico as a circulating parallel currency, selects $20,000 as a realistic figure. 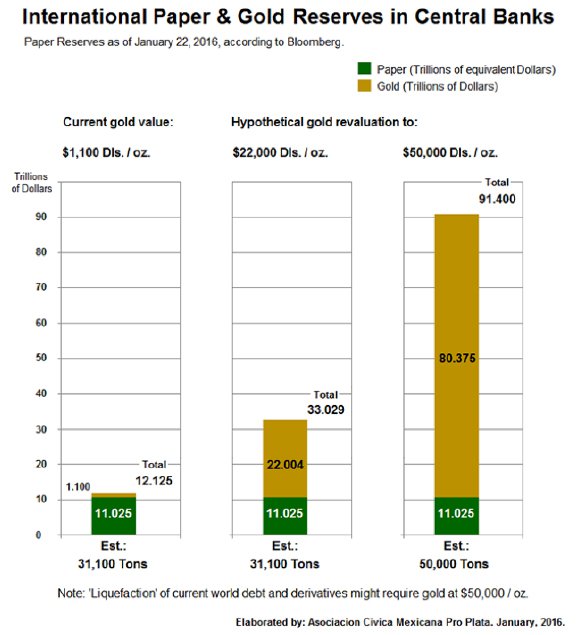 Price says, “The discipline of gold as Reserves backing currency at a revalued price will restore order to a world that has refused to adopt the necessary discipline until forced to do so in the desperate situation now evolving, where there will be no other alternative but to accept the detested fiscal and financial discipline imposed by gold.”

The idea of backing a large portion of the floating debt that David Morgan of The Morgan Report has long referred to as “paper promises“, looks like it may be moving from a once far-fetched idea towards a place on center stage.

You may think that if a gold revaluation happens, you will be able to quickly go to the local coin shop and pick up a handful as soon as the possibility of a gold price rocket launch becomes obvious. But think again. Most likely announced on a Sunday evening, by Monday morning the precious metals supply would be gone. And mining stock share prices would go through the roof. Rickards notes:

“Gold will be in such short supply that only the central banks, giant hedge funds, and billionaires will be able to get their hands on any. The mint and your local dealer will be sold out. That physical scarcity will make the price super-spike even more extreme than in 1980. The time to buy gold is now, before the price spikes and before supplies dry up.”

In summary, continue to buy and hold physical gold (and silver) as insurance first and for possible profit generation second. But now you have a third compelling reason – if gold revaluation does come to pass, those who have it will also have a personal financial game-changer of the first order!

David Smith is Senior Analyst for TheMorganReport.com and is a regular contributor to MoneyMetals.com where this article was first published. For the last 15 years, he has investigated precious metals mines and exploration sites in Argentina, Chile, Bolivia, Mexico, China, Canada, and the U.S. and shared his findings and investment wisdom with readers, radio listeners, and audiences at North American investment conferences.