Perhaps some might suggest the Prospectors and Developers Association of Canada (PDAC) annual mineral exploration exaggeration-fest should be renamed the Promoters, Deceivers and Carpetbaggers Convention given how few of those mineral explorers pushing their projects will ever see them brought into production.  Maybe that would be a little unfair, though, as those explorers and developers that grace the PDAC as exhibitors nowadays tend to be among the better of the many hundreds of juniors, but there’s little doubt even these harbour more than just a few dogs among them.

This year, the recent upturn in the gold price, gave the miners and explorers something to cheer them up.  Gold has bottomed, it is back in a bull market, they chorused, although there were quite a few words of warning from some of the more circumspect speakers at the convention – but not so from the explorers and promoters intent on talking their own pet projects up.  Promoters are like politicians – always looking to put a positive spin on things however dire their particular project may actually be.  Unfortunately this malaise also filters down to many of the actual mining companies (even some of the biggest) who seem to see themselves nowadays as primarily being in the business of keeping their investors happy through putting the best possible, but sometimes misleading, light on their latest sets of results and forward targets.  Some of this is human nature and thus deep seated in a mining CEO’s psyche – to run a mining company one has to be an eternal optimist.  If not one would be doomed to depression and worse.  I recall the CEO of a big Philippine mining and metallurgical company telling me a number of years ago that one has to be a masochist to be in the business!

But the PDAC is something else.  It is both a great Convention, but also one which can bring out the worst in delegates and even among the organisers who deep down give perhaps unwitting tacit support to a sector of the industry which perhaps attracts more than its fair share of carpetbaggers.   I was there the year an investor shot and killed a fellow attendee, who he felt had wronged him financially, on the escalators inside the Royal York hotel.  Indeed I even heard the shot from a distance, although it sounded like someone had banged a tin tray and thought nothing of it at the time. I was also there the year the Association’s highest award went to someone who’d recently been in jail on fraud charges – these were both in the days when the event was held in its entirety in the Royal York hotel.  This was before it moved to the Convention Centre more than doubling in size, and quadrupling in attendance through the ‘Investors Exchange’ section for the junior miners and some others to promote their projects from exhibition booths.  Presumably very profitable for the PDAC itself and for Toronto’s hotels.

This year’s PDAC saw attendance fall for the fourth successive year – see chart below borrowed from controversial and often extremely irreverent (some might say sometimes scurrilously accurate) mining blog Inca Kola News, which gets far more readership than does this scribe’s efforts.  (Perhaps Canadian libel laws are rather less demanding than UK ones).  It is great, though, at pointing out many of the reporting anomalies, and ego trips among some mining CEOs, that tend to tarnish this great industry. 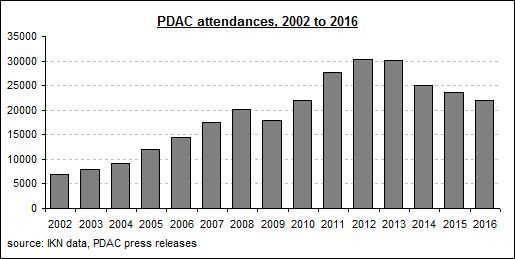 Part of the problem with the junior mining sector is that the companies are largely run by geologists with no real business experience, often in league with promoters who have little technical knowledge, but do know how to hype shares and raise money from often gullible investors.  There’s nothing wrong with good geologists – but they have to be among the most optimistic of souls and often lack the nitty-gritty expertise of mining and metallurgical engineers who have to turn a promising project into profitable reality.  Indeed geologists tend to look down on mining engineers – and vice  versa .  Engineers tend to be pragmatists while geologists are often dreamers.

But so saying the PDAC is, as noted above, a great convention providing one can see through some of the hype surrounding the industry.  It demonstrates the enormous enthusiasm for an unpopular industry.  Unpopular with the general public that is, partly due to the environmental sins of modern-day mining’s forefathers and partly due to the often hugely exaggerated potential problems in bringing a new mine to production as expressed by NGOs and environmentalists around the world, who often may have hidden agendas which are seldom revealed.

The convention does nowadays – perhaps more so than it did historically – attract the real great and good of mineral exploration and mining, as well as the bad and the ugly, and in terms of a technical mineral exploration exhibition and conference has to be among the world’s best – if not the best.  Nowadays with the big investor attendance too, there are some great financially-oriented presentations at the conference itself, and commentary on its fringes, and most of these are thankfully free of the hype one hears on the convention floor.  Yes there are metals and minerals bulls making their cases, but these are usually well-reasoned, as indeed are those who may warn of impending doom and gloom.

But perhaps it is the sideline comments rather than pre-prepared presentations which are the best indicator of where the mood lies and which give the best advice.

As pointed out in an article I have written on this year’s convention for sharpspixley.com –  PDAC in retrospect. Is the recent gold rally sustainable? a number of these well-regarded observers express doubt that the recent rally in the gold price, which has seen the precious metal rise around 20% from its low of last year, is sustainable in the short to medium term, although most would agree that they feel the bottom has indeed been reached and longer term, without committing themselves to any real timescale, that gold is indeed on the way back up.

Of course there are still some pretty heavy hitting doubters out there, and some of these carry considerable financial weight behind them which will likely be utilised to protect their own positions.  Goldman Sachs for example has just put out a note that says “We also maintain our bearish view on gold that has rallied along with the other commodities. Our short gold recommendation (which we opened with a 17% upside, in line with our $1000/toz 12-m forecast) is currently at a c.5% loss, with a stop loss at 7%.”  An article on www.zerohedge.com calculates that this stop loss position will be reached if gold hits $1291 – its back at $1270 as I write, after a pullback (correction some would say) to the $1240s.

Gold is indeed having trouble breaking out above this $1270 area, but some would put this down to the big money bears trying to protect their positions.  Many believe the big bullion banks, which may have the wherewithal to do so, are very much in cahoots with the U.S. Fed in trying to suppress, or at least control, the gold price as rising gold is seen as an indicator that all is not well with the dollar and the U.S. economy – contrary to the political spin of the day!

Interestingly, as pointed out in the Sharps Pixley article referenced earlier, Jeffrey Christian of New York’s CPM analytical group – an observer not exactly loved by the out and out gold bulls – suggested that the Goldman Sachs ‘sell gold short’ call and predictions of a gold price fall back to $1,100 and below was rather out of touch with precious metals fundamentals, although he was also one of the PDAC attendees suggesting that the recent rally was not sustainable in the short term but that gold would indeed start to turn up sustainably by the end of the year..

But, as always, the gold price is hugely difficult to predict.  At the PDAC it is easy to get carried away by the overall optimism – clutching at straws the bears would say – that the gold price is indeed on the turn, and for the better.  Time will tell if they are right this time.  They will be eventually.

In the writer’s view gold’s fundamentals are indeed looking stronger, but stronger fundamentals don’t necessarily mean the big gold price surge is yet at hand.  There’s too much big money out there which seems determined to hold it back.  The big question is whether this money can be overwhelmed by external forces as the global economy seeks to reset itself.