Last Friday, gold experienced a “golden cross,” a technical indicator that occurs when an asset’s 50-day moving average crosses above its 200-day moving average. It’s the first such movement in nearly two years and is a sign that gold might have further to climb.

But there’s more exciting news involving gold. On the same day that New Jersey Governor Chris Christie endorsed Donald Trump for president, the precious metal received its own high-profile endorsement. In a note to investors, Deutsche Bank said it’s time to buy gold, writing: “Buying some gold as ‘insurance’ is warranted.” The bank also stated its opinion that gold “deserves to be trading at elevated levels versus many other assets.”

The metal is already up 15 percent so far in 2016, its best start to the year in decades. But it started 2015 strong too, if you remember, before prices began to collapse in February. 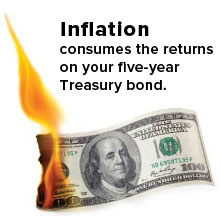 So what’s the difference between then and now?

Gold owes a lot of its success this year to negative real interest rates, something it didn’t have on its side in early 2015. As I’ve mentioned many times before, the metal has historically done well when real rates turned negative (because then you essentially end up paying the government to hold on to your money). To get the real rate, you subtract the consumer price index (CPI), or inflation, from the five-year Treasury yield. If it’s positive, investors will be more likely to put their money in Treasuries, and if it’s negative, they’ll seek out other stores of value—including gold.

In January 2015, the five-year Treasury yield averaged 1.37 percent, while inflation, less food and energy, posted a tepid 0.2 percent. This resulted in an overall real rate of 1.35 percent—a headwind for gold.

But here we are a year later, and real rates have gone subzero. With the five-year yield at 1.51 percent and inflation at a healthy 2.2 percent—its strongest reading since June 2012—real rates have dropped to negative 0.69 percent. This has helped make gold much more attractive to investors. For the month, as of February 24, the precious metal has risen nearly 10 percent. 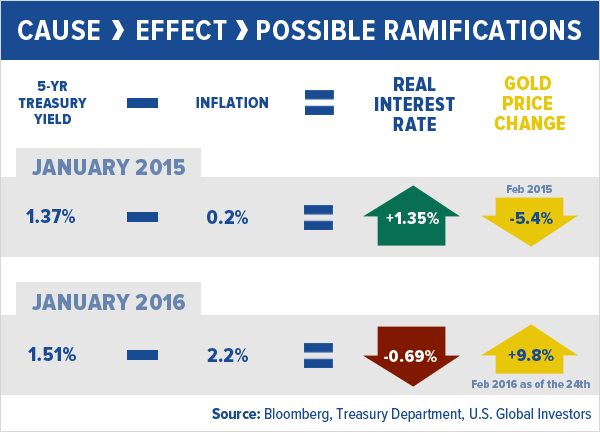 Williams argues that at one time, the official CPI was useful in determining changes in consumer prices year-to-year. But government officials continued to tinker with their methodologies, in effect “moving the concept of the CPI away from being a measure of the cost of living needed to maintain a constant standard of living.”

Below you can see the actual inflation rate, according to ShadowStats, based on 1980 methodologies. Whereas the official CPI is 2.2 percent, “real” inflation is running closer to 9 percent, adding to gold’s allure. 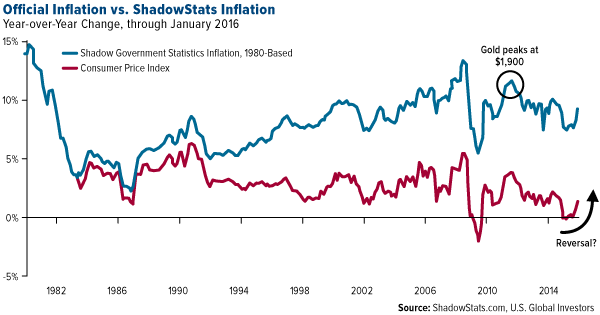 Following the S&P 500 Index’s best week of 2016, oil prices are strengthening on news that Russia and Saudi Arabia, the world’s two largest producers, are scheduled to meet next month to discuss possible production cuts. This, along with rising gasoline demand in the U.S., seasonality trends and supply disruptions in Iraq and Nigeria, has helped push both Brent and West Texas Intermediate crude comfortably above $30 per barrel. It was oil’s best week since August 2015.

The rally has given investors renewed confidence in domestic stocks after one of the largest equity selloffs earlier in the year. The correlation between crude and S&P 500 stocks is currently at levels not seen since 1990, according to the Wall Street Journal. 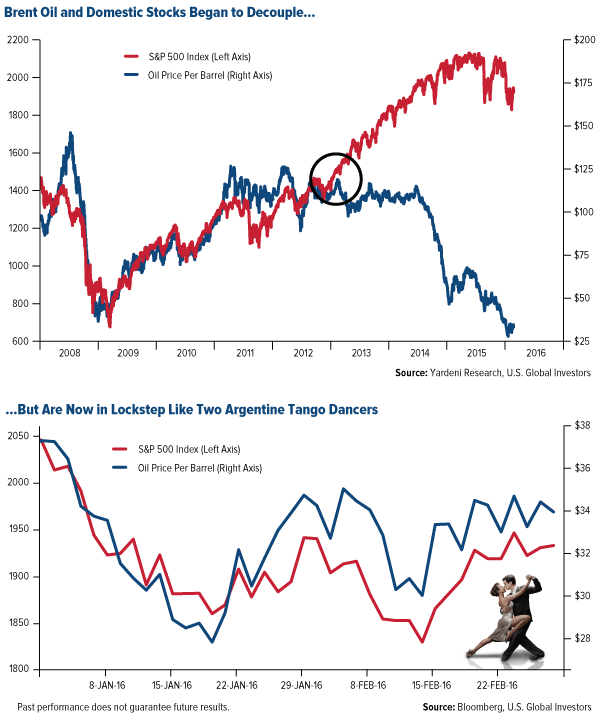 Oil’s gain arrives at a time when President Obama announces plans to impose a $10.25 “fee” on every barrel of crude sold in the U.S. The details are fuzzy at this point, but the revenue would reportedly go toward clean energy initiatives such as electric cars, charging stations, public transit and high-speed rail.

These are all admirable goals, but charging oil companies what’s essentially a tax is the wrong way to go about it. The proposal has already been met with strong criticism from analysts and think tanks, who estimate that, if enacted, it would push up production costs, hurt employment and capital formation and lead to slower growth. The Congressional Research Service (CRS) concludes that oil and gas prices would rise, while the Tax Foundation writes:

[T]he annual level of GDP would be 0.3 percent less than otherwise (an annual loss of $48 billion in terms of the 2015 economy), private business capital stocks (e.g., equipment, structures) would be 0.6 percent lower, and 137,000 full-time jobs would be lost.

Again, affordable and reliable clean energy is a noble pursuit, but in the case of the $10.25 tax, the costs far outweigh the benefits. A much better and possibly more consequential strategy can be found in private sector efforts such as Bill Gates’ recently-founded Breakthrough Energy Coalition. Together with a couple dozen other billionaire businessmen and executives—including Richard Branson, George Soros, Mark Zuckerberg, Amazon CEO Jeff Bezos, Bridgewater Capital founder Ray Dalio and Alibaba CEO Jack Ma—Gates plans to invest billions into clean energy innovations over the next several years.

We’re encouraged by the fact that the U.S. just launched its first-ever shipment of liquefied natural gas (LNG) for export. The LNG, sold by Houston-based Cheniere Energy, left the Sabine Pass terminal in Louisiana last week and headed for market in Brazil.

This historic event confirms the U.S. as a major energy superpower, with the potential to be the world’s top supplier, and it should help support LNG demand around the world. The industry has a bright future.

Here at U.S. Global Investors, we follow government policy closely because it’s a precursor to change. The political party matters little. It’s the policies that have the most significant ramifications, and both major American parties are capable of creating both good and truly awful policies.

Having said that, I might disapprove of Obama’s 10 percent oil tax, but I applaud him for continuing to put his weight behind the ratification of the Trans-Pacific Partnership (TPP). The TPP, as I’ve pointed out numerous times before, would help global trade by eliminating 18,000 tariffs among the 12 participating Pacific Rim countries. Last week the president said he planned to send the agreement to Congress for a vote sometime this year, and when that day comes, I urge our senators and representatives from both sides of the aisle to make the right choice.

Now more than ever, global trade needs a boost. According to the CPB Netherlands Bureau for Economic Policy Analysis, the value of goods traded across the globe, in dollar terms, fell a whopping 13.8 percent in 2015 after falling 2 percent the previous year.

Meanwhile, world trade volumes grew only 2 percent in 2015, the slowest year since the financial crisis, according to a recent report by the Organization for Economic Cooperation and Development (OECD).

The OECD additionally trimmed its 2016 growth outlook to 3 percent, down 0.3 percentage points from its November projection.

Joining the OECD in downgrading growth projections is the International Monetary Fund (IMF), which lowered its forecast 0.2 percentage points to 3.4 percent. To strengthen growth, G20 countries should “reduce overreliance on monetary policy,” the IMF writes in a report ahead of the meeting among finance ministers and central bank governors in Shanghai past weekend. Further, “credible and well-designed structural reforms” are needed to “lift potential output” and provide some “coordinated demand support.”

I second the IMF’s calls for G20 nations to rebalance their monetary and fiscal policies and to reform rules and regulations that stand in the way of global trade. The TPP, which will involve countries that represent 40 percent of the world’s GDP, is a step in the right direction. But for synchronized growth to be achieved, more will need to be done.