By JT Long of The Gold Report

When celebrity investor Mark Cuban announces to the world that he is investing in gold, is that a sign that the ride up is just getting going, or that it has already peaked? The Gold Report reached out to long-time experts in the sector for a better understanding of what is moving the markets—negative interest rates, a topping dollar, Fed testimony, increased gold buying in China—and what that means for junior mining stocks in the coming months. 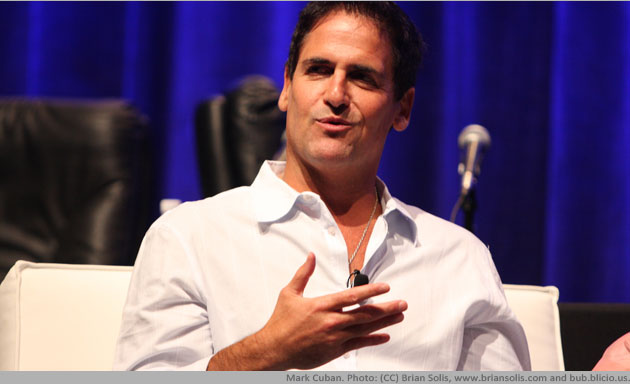 A lot of investors were turning back to gold in mid-February as an alternative to a larger stock market that didn’t seem to make sense anymore. The Dow Jones Industrial Average dropped 1.6% in one day, falling below its August low and spooking the chart-watchers. “I think people are so confused about this market. Nobody really understands what’s happening, including me,” billionaire businessman Mark Cuban told CNBC’s “Fast Money: Halftime Report” on Feb. 11. “When traders don’t know what to do, they go where everybody is. And I thought that would be gold.” He then shared his recent purchase of gold call options, not as a hedge, but in anticipation of momentum pushing the price of the metal higher.

The day before, Frank Holmes, CEO and chief investment officer at U.S. Global Investors Inc., predicted in his <href=”#.vrvqv1kul4y”target=”_blank”>blog that gold was shaking off its downward trend after three years of losses and that these highs will be “stickier” than previous rallies. His optimism was based on the gold price breaking through above the 200-day moving average.

Holmes pointed to increased demand for gold from China, where physical delivery reached a record 2,596 tonnes, and increased gold coin sales in Europe, the U.S. and Australia. He also noted that a trend toward negative interest rates in Sweden and Japan also makes gold more attractive. 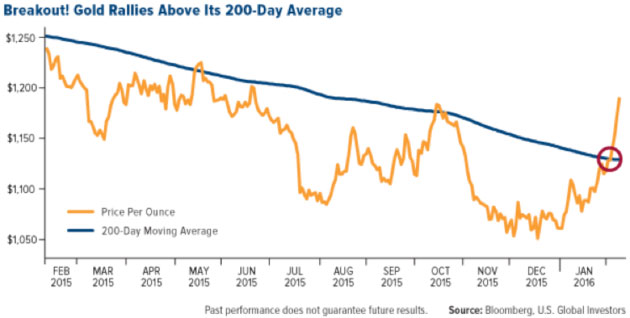 We asked some of our most popular experts to comment on the fundamentals Holmes quoted.

Joe Foster, lead investment team member with the Van Eck International Investors Gold Fund, also credited increased Asian demand for pushing precious metal prices up, and pointed out that what is good for gold could be even better for gold equities. In a note to investors, Foster said, “It makes sense that equities should outperform gold during rising gold prices, and underperform if gold falls. We now see the industry in the best shape it has been in for a long time. Unfortunately, this positive transformation of the sector coincided with, and to some extent was intensified by, a period of falling gold prices. Equities have consistently demonstrated their effectiveness as leverage plays on rising gold during these past years.”

Many saw the declining stock market trends as bullish for precious metals and commodities. Jeb Handwerger, in a Feb. 8 article titled, “Did Precious Metals and Junior Gold Miners Just Bottom?”, said, “Now we could be in the early stages of a massive bull market in junior equities off of a historic low breaking above the 200-day moving average. Meanwhile, the U.S. dollar has failed to break through early 2015 highs and is heading lower, breaking below the 200-day moving average.”

Handwerger speculated on the impact for the mining stocks. “Huge amounts of institutional capital may be flowing into the major gold miners such as Barrick Gold Corp (ABX:TSX; ABX:NYSE), Newmont (NEM:NYSE), Kinross Gold Corp. (K:TSX; KGC:NYSE) and Agnico Eagle Mines Ltd. (AEM:TSX; AEM:NYSE), which have all seen big moves off of December lows. There is an increasing probability that we saw the bottom at the end of 2015. Major investments have taken place recently in the junior sector specifically in uranium, gold and lithium. Fission Uranium Corp. (FCU:TSX), Gold Standard Ventures Corp. (GSV:TSX.V; GSV:NYSE), Orocobre Ltd. (ORL:TSX; ORE:ASX) and Oban Mining Corp. (OBM:TSX) have all recently raised large amounts of capital. This could be just the beginning, as other high-quality situations may find the critical cash needed to advance mineral projects.”

Eric Coffin, editor of the HRA (Hard Rock Analyst) family of publications, said in an interview withThe Gold Report in December that the U.S. Dollar Index had topped, and that could mean gold equities had bottomed. Reached Feb. 12, he said, “It is shaping up just the way I thought it would.” He pointed to negative bond rates as making even a zero yield on gold look attractive.

Coffin also didn’t see the change in sentiment as a temporary blip. “I don’t see a reversal in the near term because there are no easy answers. New York is going to enter a bear market and that is good for gold and it will be even better for gold equities, which tend to give you more leverage to gold price changes.” He ventured that generalists coming back to the market would start with the quality producers, and work their way down the food chain.

Shadowstats editor John Williams also pointed to currency concerns for the change in investor sentiment toward the shiny metals. “A weakening dollar, perceptions of dwindling prospects for aggressive rate hikes by the Federal Reserve and mounting global market concerns as to financial system stability all have combined to boost gold and silver prices,” he said.

“We could be in the early stages of a massive bull market in junior equities off of a historic low.” —Jeb Handwerger

Williams also did not see much light for the larger economy on the statistical horizon. “Exacerbating market difficulties, U.S. economic reporting in the near term should continue to deteriorate markedly, not only with generally downside surprises and continuing weakness ahead for monthly data, such as industrial production, but also with downside revisions to, and outright contractions in, near-term GDP reporting. These circumstances should help to keep further Fed tightening in check until after the November presidential election, and generally should keep downside pressure on the exchange-rate value of the U.S. dollar, with upside pressure on prices for precious metals.”

Doug Casey has long preached that gold is a commodity like coffee, copper or aluminum. “But unlike other commodities, gold is money,” he reminded his readers in an email on Feb. 11. “It’s held its value for thousands of years. Gold is a safe-haven asset, which is why investors often buy gold when the stock market is struggling.”

He continued, “Since the beginning of the year, gold has soared against every fiat currency, including the U.S. dollar. Gold stocks have outperformed bullion, and both the miners as well as the metal have been generating higher highs and higher lows. Technically, this is an encouraging picture, as typically seen at the beginning of a bull market in precious metals. Many brokers are skeptical that this rally in gold will hold, and virtually no research house has lifted its gold forecast—yet. This is positive for bullion’s future price appreciation potential.

“Fundamentally, I think we are at a key reflection point for precious metals. After 637 rate cuts and $12.3 trillion in global quantitative easing, I think the world is finding out that governments and world central banks have created a colossal Keynesian failure, which is now starting to unravel. Gold is a hedge against government, and the 16% rise in the bullion price this year is telling a story. Central banks have no more dry powder to reinflate the markets. I think the free market is now in an early stage of a lengthy process where all asset prices will revert to their mean and where fair market value will ultimately be restored.”

“The Dow and the S&P have gone down so much since the first of the year that a countercyclical correction would not surprise me at all.” —Bob Moriarty

Siegfried’s vision for gold was upbeat. “I consider this as a cyclical bull market for precious metals, whereby gold will rise against most financial assets and all fiat currencies for most of the time. What we are going to see is a reversal of what has been the pattern over the last few years. As gold rises against fiat currencies, financial assets and most commodities, this will result in rising profit margins for the gold miners during a prolonged period of time. This is how the cycle has always worked. I think the next opportunity for gold stocks is in front of us and investors should start to position for it. I would still act cautiously, while keeping the long-term, emerging cyclical bull trend in mind. Do not to get distracted by short-term noise.”

Bob Moriarty, founder of 321gold.com, warned that while gold may be entering a bull market, it probably won’t be a smooth climb up. “When you have the HUI at 59% in two weeks, betting on it going up another 59% in two weeks is irrational. It should correct, and it would be perfectly natural for it to correct.”

He put the gold trend line in perspective by pointing out the long climb up for the larger market. “The S&P and the Dow have been topping for a year. We have started to crash, but even during a crash, you have countercyclical moves. I would think the Dow and the S&P have gone down so much since the first of the year that a countercyclical correction would not surprise me at all. I’m a contrarian, so when things go up, I look for them to turn, and when they go down, I look for them to go the other direction. The S&P and Dow have gone down a lot in six weeks,” he warned.

The inevitable correction would be temporary, Moriarty predicted. “I am expecting a bit of a gold correction after the upward moves at the beginning of the year, but when the market starts up again, a lot more people will be getting on board.”

1) JT Long wrote this article for Streetwise Reports, publisher of The Gold Report, The Energy Reportand The Life Sciences Report. 2) The following companies mentioned in the interview are sponsors of Streetwise Reports: Gold Standard Ventures Corp. and Fission Uranium Corp. The companies mentioned in this interview were not involved in any aspect of the interview preparation or post-interview editing so the experts could speak independently about the sector. Streetwise Reports does not accept stock in exchange for its services. 3) Interviews are edited for clarity. Streetwise Reports does not make editorial comments or change experts’ statements without their consent. 4) The interview does not constitute investment advice. Each reader is encouraged to consult with his or her individual financial professional and any action a reader takes as a result of information presented here is his or her own responsibility. By opening this page, each reader accepts and agrees to Streetwise Reports’ terms of use and full legal disclaimer. 5) From time to time, Streetwise Reports LLC and its directors, officers, employees or members of their families, as well as persons interviewed for articles and interviews on the site, may have a long or short position in securities mentioned. Directors, officers, employees or members of their families are prohibited from making purchases and/or sales of those securities in the open market or otherwise during the up-to-four-week interval from the time of the interview until after it publishes.