Palladium did best in dollar terms of all commodities in 2014, while gold’s overall performance, while disappointing for gold bulls, was far better than most others.  Article now up on Mineweb.com – to read it and other global mining and metals news and comment there click on this link

Before you gold bulls out there cry ‘rubbish’ it should be borne in mind that last year was a disastrous year in dollar terms for virtually all commodities across the board.  Only four internationally traded commodities showed gains over the year, while gold was the least bad negative performer among the rest with a drop of only 1.7% – but has now shot up nearly 10% since the start of the year.  Indeed, as we pointed out in a recent article, gold performed positively over 2014 in virtually every currency other than the U.S. dollar.  So despite being a disappointing year for dollar area gold bulls, it will have been a positive year in all non-dollar tied nations.

We are indebted to Frank Holmes and U.S. Global Investors for the graphic below which sets out the performance comparisons for the globally traded commodities since 2005.  It can be see that palladium, nickel, zinc and aluminium were the only commodities which showed gains in price – with palladium the comfortable winner for the year.  But gold, despite showing a small loss, performed hugely better than most other commodities like copper which was down a heavy 14% during the year.  But even this was a small fall compared with crude oil – down 46% – and natural gas – down 31%.  Even agricultural commodities like corn and wheat were down in price by much more than gold.  A larger high res pdf version of this table is available by clicking on this link. 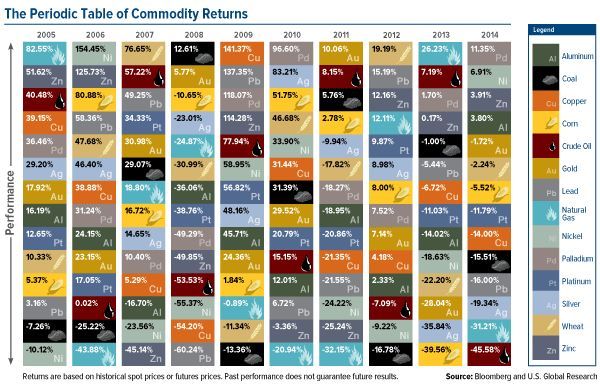 While slower industrial growth than hoped in the West and the downturn in the Chinese economy primarily responsible for the weaker commodity prices, the prime culprit will have been the U.S. dollar which rose by 13% over the year against the basket of currencies against which the dollar index is measured.  So in most currencies other the reversal in fortunes for commodities would not have been nearly so bad.  While in dollar terms 2014 may well have seen the biggest commodity reversal in recent years (since 1986 in fact), in other currencies it will not have been nearly so bad.  As we pointed out in our earlier article on the subject  (see link at the start of this article), perhaps we are too fixated on the dollar as the reference baseline when making these kinds of judgements.  In the Russian ruble for example commodity prices will have been booming in 2014!

Palladium’s performance to buck the overall trend with a significant rise of more than 11% was partly due to a relatively buoyant global market for automobile sales, coupled with an assumed  supply deficit of over 1 million ounces in 2014 according to the platinum experts at Johnson Matthey.  However there didn’t appear to be any significant non-availability of metal presumably because stockpiles at the main users have been well maintained when prices were lower.  Platinum also saw a perhaps 1 million ounce deficit, largely due to the South African platinum mine strikes, but here the overall price still fell – perhaps because of additional supply coming out of the platinum ETFs.