A contributed article from Dr Fraser Murrell in Australia, together with an added comment from me at the end on what Dr. Murrell’s thesis might mean for gold. Dr Murrell is an Australian mathematician and quantitative analyst with substantial experience in the financial sector as analyst, broker and trader.

Today, stocks are usually measured by the “Price to Earnings” or P/E ratio. For example, a P/E ratio of 20 means that each extra dollar of Earnings E (per share) increases the Price P of that share by 20 dollars. But this (on its own) is both a volatile and deceptive measure of value.

Another metric is the “Price to Asset”, or P/A ratio. This measures Price relative to the net Asset backing of the share. Assets are the things which companies use to generate Earnings and use to post as collateral to borrow money.

But since 2009, under ZIRP and the direction of Wall Street, many companies have chosen to consume both their Earnings and cheap debt to buyback their stock, rather create long term Assets. Of course, stock buybacks boost the (short term) share price and the director’s remuneration, but do nothing for the long term solvency of the company. With the increase in debt and the lack of Asset creation, most companies are now in a much weaker position than they were prior to the last downturn in 2009, despite that being a near-death experience providing reason to repair balance sheets.

My point is that when Earnings next falter and/or interest rates “normalize” the increased debt will not be serviceable and many companies may suddenly go bankrupt – because they don’t have sufficient unencumbered Assets to use as collateral for fresh borrowing. Equity raisings and the junk-bond market are the last resort for companies needing money and when these markets seize up (as is currently occurring), the collapse begins and then spreads through the economy as the dominoes fall. Only those with sound assets that generate reliable earnings survive.

A more useful investor model is : P = P/E  x  E/A  x  A As a measure of solvency, some investors (like me) focus more on the quantity and quality of the Assets (A) and on the Earnings on the Assets (E/A) – rather than on the Price to Earnings (P/E), which can jump around (or disappear) from quarter to quarter.

But if we value SP500 companies today (or indeed the USA as a whole) by the metric P/A rather than P/E, then one comes to the conclusion that (because of the current debt levels), when the economy next falters and Earnings fall, the result will be far worse than in any previous downturn. This is because companies have run down or off-shored their productive assets to China and elsewhere and because available earnings have been squandered on share buybacks which fuelled the last boom.

But then the next downturn comes and your business not only fails, but your house price drops by 10%, so that you now have both negative Earnings E = ($25,000) and negative Assets A = ($50,000). Which means you are forced to declare bankruptcy.

This is the miracle (or rather insanity) of Wall St – that a company with nothing (except a temporary earnings stream wholly consumed by the company) – can be sold to the public for billions of dollars – based on questionable “P/E ratios” using dodgy Earnings – only for that same company to go bankrupt because it never had or created any Asset backing. The money made by company directors and the losses taken by the general public over history are staggering. That said, there are a few (like Warren Buffet) who do focus on the assets and have been able to create long term value for their shareholders.

What this might mean for gold if markets collapse again

A very concise look by the editor at what could happen to the gold price if the implications of the above article lead to yet another collapse in equity prices as in 2007-9 – or perhaps worse!

The Great Global Financial Crisis of 2007-2009 should still be in the memory of most serious investors although we think the lessons that should have been learned from it have been largely forgotten in the Fed-fuelled euphoria of seemingly endless rising equity prices – well, seemingly endless until last year when prices flattened and have come back sharply in the first couple of weeks of 2016..  As pointed out in  my latest article here:Equities tank, dollar down, gold up, 201 6 is already showing the potential to become an annus horribilis for equity investors should the downturn continue – or horror of horrors, accelerate – particularly if the realisation of what Dr Murrell has noted above begins to sink in.

Let us go back to 2007 – the start of the GFC (although like now the seeds for massive declines had been sown in the years before.).  Here follows a chart taken from The Sovereign Investor website which shows the relationship between the performances of the S&P 500 and the gold price from the beginning of 2007 to the end of 2009.  This just about says it all.  Gold did take a dip in October 2008, mainly due to margin calls with institutions and investors having to sell good assets along with bad to stay afloat,    But it fell less, and recovered far faster, than general equities (and went on to double again in price in the following two years before retracing around 40% from late 2011 up until the present.)  Could we be heading for ‘deja vu all over again!’ 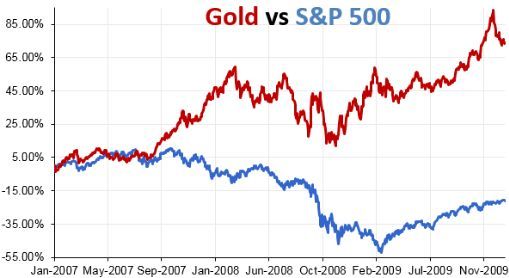 been sown in the