Frank Holmes, CEO and Chief Investment Officer of US Global Investors has released his latest thinking on three asset classes which he feels should provide positive returns in 2016 – Gold, Oil and Airlines.  As a Precious Metals site we are republishing his views on gold for the year ahead, with a link to the full article at the end.

Going forward, gold prices will largely be affected by U.S. monetary policy. The Federal Reserve began its interest rate-normalization process with a small but significant 0.25 percent increase, and unless the Fed has reason to mark time or reverse course in 2016, rates should continue to rise steadily.

This will bump up not just the U.S. dollar—which historically shares an inverse relationship with gold, since it’s priced in dollars—but also real interest rates. As I’ve discussed many times before, real rates have a huge effect on the yellow metal.

When gold hit its all-time high of $1,900 per ounce in August 2011, real interest rates were sitting at negative 3 percent. In other words, if you bought the 10-year, you essentially lost 3 percent a year on your “safe” Treasury investment. Since gold doesn’t cost anything to hold, it became more attractive, and the metal’s price soared.

But today, the U.S. has virtually no inflation—the November reading was 0.5 percent—so real rates are running at less than 2 percent.

Across the Atlantic, many investors are now realizing that Europe’s quantitative easing (QE) programs have failed to improve market performance in any substantial way. Earnings per share growth estimates in the European stock market have not budged. The lack of real growth in this market is a compelling argument for global investors to own gold for the long term.

Low interest rates, higher taxes and tariffs and more labyrinthine global regulations since 2011 are all contributing to the global slowdown. Neither QE3 in Europe nor QE3 in the U.S. has led to a marked improvement in growth. What markets need now to ignite growth are fewer taxes, tariffs and regulations and smarter fiscal policies. 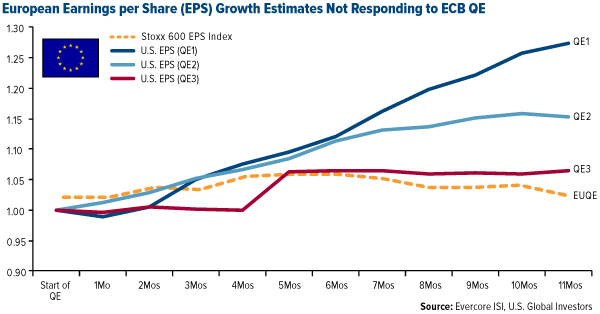 The chart below, courtesy of Evercore ISI, helps to illustrate some of the challenges we’ve faced in 2015 in terms of the investments we manage. Growth remains scarce globally. M2 money supply in the U.S. also looks dim.

Looking forward, we’re hopeful that these two indicators—global trade volume and money supply—will turn up. Both are necessary to improve commodity and emerging market investments.

On the upside, gold demand in China remains strong. It’s important to remember that more than 90 percent of demand comes from outside the U.S., in China and India in particular. Precious metals commentator Lawrie Williams reports that Chinese gold withdrawals from the Shanghai Gold Exchange (SGE) crossed above 51 tonnes for the week ended December 18.

Already Chinese demand is higher than the previous annual record set in 2013, and if total withdrawals for 2015 climb above 2,500 tonnes, as Lawrie expects, [latest figures suggest the full year total will come out nearer 2,600 tonnes with  a total already recorded of  2,555 tonnes up to 25th Dec – and China doesn’t close down for Christmas – See Chinese 2015 gold demand equates to around 80% of total global gold output – Editor] this will be “equivalent to around 80 percent of total global annual new mined gold production.” We expect demand to rise even more as we approach the Chinese New Year—historically a key driver for gold’s Love Trade—which falls on February 8 in 2016.

If you wish to read Frank’s views on Oil and Airlines also click on:  Hope for the New Year: 3 Asset Classes for 2016