The following is an edited version of an article I’ve written for sharpspixley.com – and was posted on that site on Friday, entitled: CHINA: SGE Gold withdrawals head for huge new record year.  This year’s withdrawal figures passed the 2013 full year record a months ago already and at the current rate will exceed the previous record figure by around 400 tonnes by the year end – although there’s a chance the figure could be higher still as withdrawals tend to rise as we get closer to the Chinese New Year, which falls on February 8th in 2016.

The big growth in SGE withdrawals this year is demonstrated  by the chart below from Nick Laird’s www.sharelynx.com website  which shows total withdrawals at the same time for the past seven years.  As can be seen gold taken out from the Shanghai exchange have been growing strongly year by year apart from a blip in 2014.    This year’s figure for week 47 is thus a massive 538 tonnes higher than at the same time last year and 382 tonnes higher than in the previous record 2013 year.  As can be seen from the chart the growth in withdrawals accelerated hugely in 2013 compared with previous years – a trend which has continued pretty well since. 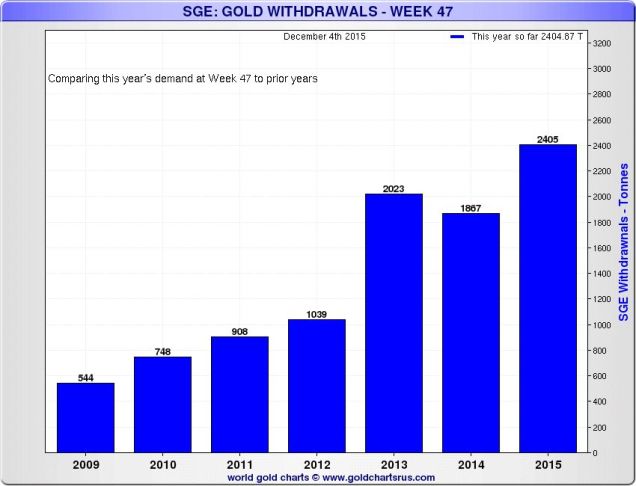 The Sharps Pixley article notes that although Shanghai Gold Exchange (SGE) weekly withdrawal figures seem to have fallen back a little from their heady July/August/September heights, when at times over 70 tonnes of physical gold were taken out of the Exchange’s vaults in a single week, this year’s total is still heading for a huge new record high.  Total withdrawals so far this year to the end of last week (Dec 4th – the SGE reports withdrawals a week in arrears) have amounted to just under 2,405 tonnes after a figure of 42.6 tonnes in the latest reported week.  The record full year withdrawals figure was back in 2013 when 2,181 tonnes were withdrawn – a figure which was already surpassed several weeks ago and with virtually four weeks of withdrawals still to come this year the full year total looks to be heading for the high 2,500s.  For reference the full year SGE withdrawals figure in 2014 had fallen back somewhat to 2,102 tonnes – still comfortably the second highest year on record at the time.

It was also noted that SGE withdrawal figures do remain running well in excess of known Chinese gold imports plus domestic production so far this year (See: 2016 a crunch year for physical gold supply).  The linked article suggests total gold availability of only around 2,100 tonnes for the full year (which includes a perhaps conservative estimate of around 200 tonnes from scrap sources).  However China is extremely reticent about reporting all its import and gold supply figures, so it is conceivable the actual figure could well be higher still perhaps bringing it closer to the SGE withdrawals metric.

But be that as it may, and given the huge discrepancy between the SGE figures and those for Chinese domestic gold consumption from the major analytical consultancies, if one just looks at comparative SGE figures they will provide a great guide to the trend in Chinese domestic gold flows and consumption so these gold flows have thus been trending sharply higher this year.  With the Chinese economy continuing to expand, even though at a much slower pace than in previous years, it would not be unreasonable to assume Chinese gold demand will continue to grow alongside the nation’s GDP.  It will thus be interesting to see what next year brings.

As readers will know, China is going through a centrally planned restructuring of its economy which is moving away from being export and manufacturing driven to being domestic consumer and services oriented following a pattern much of the Western World took generations to accomplish, yet China is aiming to do this in a few short years.  It is proving to be a painful process, but perhaps not so much for the Chinese themselves, but more for those who had been relying on ever-growing Chinese manufacturing growth as their primary market for raw materials to fuel manufacturing growth.  Looking ahead China, having built new cities and a remarkable infrastructure, is well placed to build on these plans which will continue to see the domestic purchasing power of its people grow as more and more services type better paying jobs are created.  Antiquated manufacturing plants are being closed down, particularly in the ongoing drive to reduce pollution which will perhaps put China at the forefront of new technological development, further enhancing its global position.