Furthermore, the amount of gold being taken out of SGE vaults is rising again as we draw nearer to the year-end with the latest figure for the week ending Nov 20th at 54 tonnes bringing the year to that date total to a massive 2,313 tonnes (as compared with the previous record 2013 full year total of 2,181 tonnes).  The year to date figure is equivalent to around 80% of current global new mined production on its own.

If gold withdrawals from the SGE continue at the current rate until the year end then the annual figure would come out at just under 2,600 tonnes – nearly 20% higher than in the previous 2013 record year

Readers may recall that SGE gold withdrawals were huge in the run up to the Golden Week holiday in September, hitting well over 60 tonnes a week (over 70 tonnes on three occasions) in several weeks in July, August and September, but following the holiday they dropped back to the 40s although still remaining at a substantial level for the time of year.  But recent weeks have seen deliveries beginning to rise again. The year-end period tends to see strength in SGE withdrawals as jewellers and fabricators start to stock up for the demand that comes ahead of  the Chinese New Year which next year falls on February 8th (a Monkey year in the Chinese zodiac).  The New Year is a time of gift giving and invariably sees a further surge in gold demand so it would not be unreasonable for weekly withdrawals to continue to increase and perhaps peak again in January. 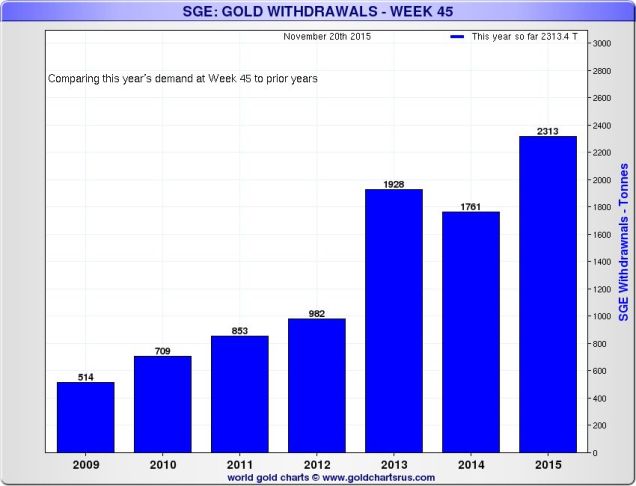