In the following article, Frank Holmes looks specifically at the performances of five major global currencies which are very closely tied to (mostly) specific commodities which have been falling dramatically in US dollar terms.  There are obviously a number of others which have been similarly affected in the global commodities crash and, although not specifically mentioned in most cases, gold is also a significant contributor to the economies of all five and while the currencies noted may not track gold as closely as they do iron ore, oil and gas and copper, gold prices in all of these have performed hugely better than they have in the US dollar.

5 World Currencies That Are Closely Tied to Commodities

By Frank Holmes, CEO and ChiefInvestment Officer, US Global Investors

For more than a year now, commodity prices have been under pressure from the strong U.S. dollar and slowing global demand. This has made a huge dent in the balance sheet of many net exporters of resources, in turn weakening their currencies.

This should come as a shock to no one, but what most people don’t realize is just how closely some currencies track certain commodities. When I presented at the International Mining and Resources Conference in Melbourne, Australia, earlier this month, I shared several charts that show this correlation. Many attendees were astounded—and we’re talking professional economists, money managers and CEOs here.

With that said, I think it’s important that you see this correlation as well. Below are five world currencies that have been impacted by lower commodity prices.

Australia now accounts for around a third of global iron ore production, according to the country’s budgetary office. This means that its income is very sensitive to price changes. As demand from China, the world’s largest consumer of iron ore, has softened, so too has the Australian dollar. 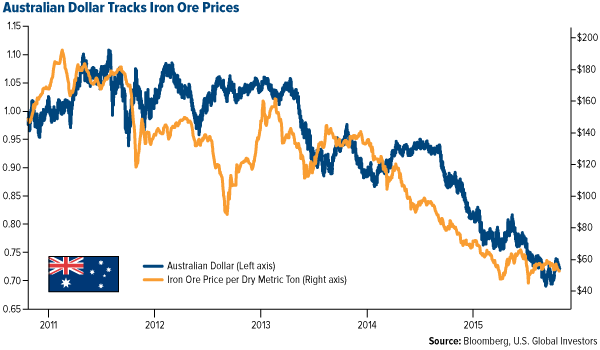 The sixth-largest oil producer in the world is Canada, about a quarter of whose exports is oil. The Conference Board of Canada, a not-for-profit economic research group, estimates that sales for the country’s energy sector will recede a sizable 22 percent this year. In Alberta, where revenue from oil sand exports had until recently helped the province become the fastest-growing in Canada, GDP is expected to contract 1 percent. And in September, the country’s economy shrank for the second straight quarter. As for the Canadian dollar, it’s fallen around 15 percent against the dollar for the one-year period. 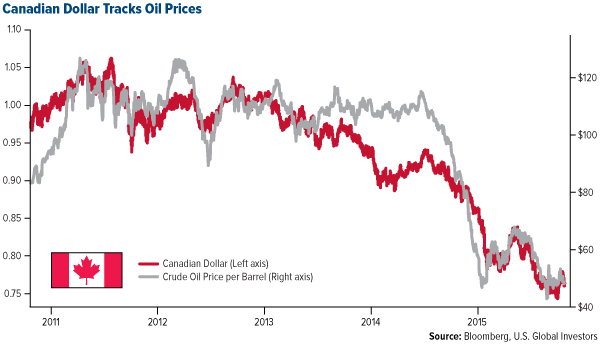 Compared to Canada and Australia, Russia’s export mix isn’t nearly as diversified: About half of its exports in terms of value are a combination of oil and natural gas. (Russia sits atop the third-largest oil reserves in the world, the number one natural gas reserves.) It should come as no surprise, then, that its currency is highly influenced by Brent oil. Where oil went starting in July 2014, so went the ruble. 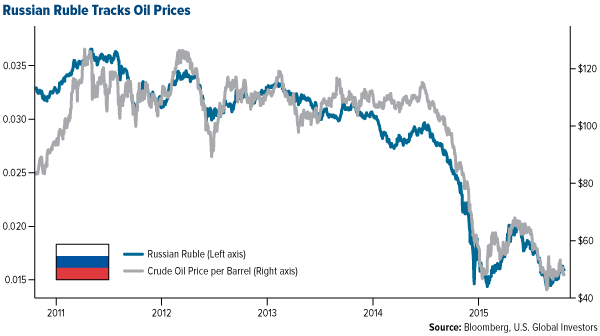 The same story can be found in Colombia, where oil exports are responsible for about 20 percent of government revenue. Officials estimate, however, that oil sales will total $1.1 billion in 2016, compared to $6.7 billion in 2014. With prices lingering just above $41 per barrel, the Colombian peso has retreated 30 percent against the U.S. dollar for the one-year period. 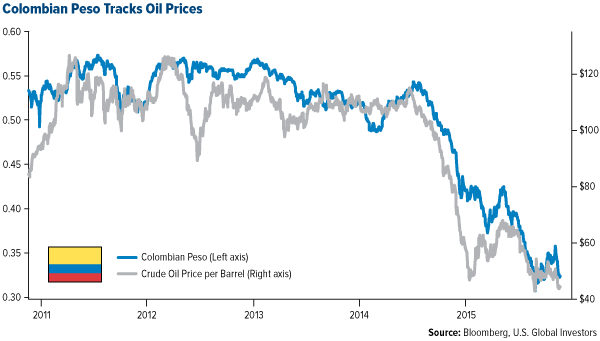 Besides gold, copper is Peru’s most important mineral export by value. With around 13 percent of the world’s copper reserves, it’s the third-largest producer after Chile and China. As such, the Peruvian sol has declined in tandem with the red metal.