An interesting graphic from Nick Laird’s www.sharelynx.com group of websites.  This one shows net monthly Hong Kong gold exports to China, Shanghai Gold Exchange (SGE) withdrawals and the correlation between the two.  This is hugely relevant in the context of how significant the Hong Kong net gold export figures are in relation to overall Chinese demand as represented by SGE withdrawals. 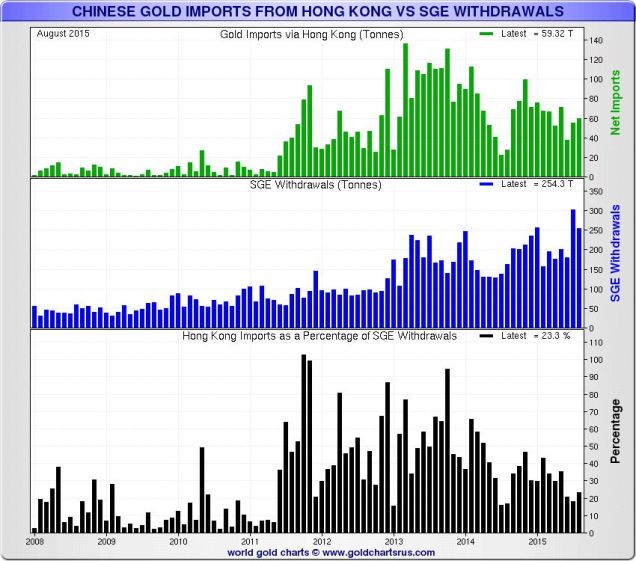 What can be seen from the charts was that there was a much more significant correlation between the Hong Kong exports and SGE withdrawals up to Q1 2014, but after that the Hong Kong percentage has been mostly declining and was down to only 23% for the latest month for which figures are available (August).  June and July figures were even lower.   This shows that Hong Kong gold export figures are very definitely no longer the proxy for Chinese gold demand they used to be despite some analysts, and the media, assuming, or implying, that they are.

The reason for this is that Hong Kong is becoming less and less important as a supply route for gold into mainland China due to gold import regulation changes.  We have already pointed out that two of the biggest supply routes for gold into China – via Switzerland and the UK – are now shipping very significant percentages to the Chinese mainland directly, whereas prior to 2014 nearly all their gold export traffic was via Hong Kong.  (See: What is China’s real gold demand?).

We can glean these statistics directly from the Swiss and UK export figures as China publishes no direct data on gold imports to the mainland.  Whereas some gold was always going direct to the mainland and bypassing Hong Kong, a relaxation on which ports of entry and who could import gold directly has significantly moved the goalposts and undoubtedly some sources of Chinese gold imports may be moving 100% of their gold directly into the Chinese mainland as opposed to the circa 40% we are already seeing  across the major import routes from countries which do publish the relevant data.

Of course the other significant source of Chinese gold is from that mined on the mainland itself, and as a byproduct from the big base metals smelting and refining sector- possibly as much as 480 tonnes this year, up from around 460 tonnes in 2014.  This comes to around 20% of China’s likely 2015 total gold demand.