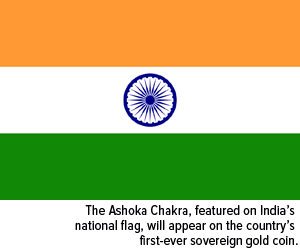 Gold tends not to leave India once it enters. As the world’s largest importer, the country consumes massive quantities of the yellow metal—it’s on track to take in 900 tonnes of the stuff this year—where it remains in private families’ coffers, mostly in the form of jewelry and decorative heirlooms. It’s estimated that less than 10 percent of all Indian gold demand is in bars and coins.

That might change this month—strong emphasis on “might”—as the India Government Mint will issue its first-ever sovereign gold coin, just in time for the fall festival season, which kicks off November 11. The coin will reportedly feature the Ashoka Chakra, the traditional 24-spoked symbol that appears on India’s national flag.

Consider the immense popularity of the American Eagle, the Canadian Maple Leaf, the British Sovereign, the South African Krugerrand and others—and now this month, India’s coin will join their exalted ranks. You might wonder why India, whose notoriously insatiable demand for gold stretches back millennia, has only recently decided to join other nations in issuing a sovereign gold coin.

The answer has much to do with the government’s interest in trimming massive net inflows of the yellow metal and containing its impact on the country’s trade balance. As I said, gold is so highly-valued by Indian citizens that once it enters the country, it stays in the country, largely as family heirlooms.

The World Gold Council estimates that 50 percent of Indian wedding expenses is on gold. And when you consider that about 20 million weddings occur each year on average in India—many of them featuring gold in some capacity—it becomes very clear that this affinity to the precious metal is shared by all.

Furthermore, because many Indians distrust government banks, they prefer to protect their financial security by holding physical gold.

And who can blame them? India’s own central bank holds more than 557 tonnes of the metal for the very same reason: financial security.

But apparently the government takes the position that you can have too much of a good thing, even something as precious and auspicious as gold, and therefore seeks greater control on how it manages net inflows.

“Such an Indian gold coin would help reduce the demand for coins minted outside India and also help to recycle the gold available in the country,” says Arun Jaitley, India’s Minister of Finance.

But will Indians be buying? It’s probably too early to tell. 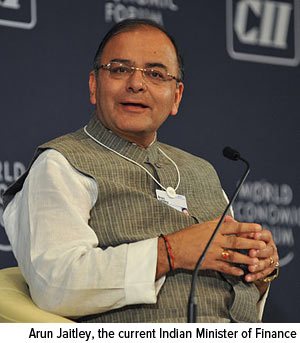 What can be said is that the plan to issue the coin is part of a broader government strategy to change the way Indians invest in gold. I always say that government policy is a precursor to change, and the new policies announced back in the spring are scheduled to go into effect soon.

One such program involves a gold bond, “which would not be backed by gold,” explains Jeffrey Christian, a managing partner at commodities consultancy group CPM Group, who spoke recently at the Denver Gold Forum. Instead, the bonds would be issued by the Reserve Bank of India, the underlying assumption being that some Indians would prefer gold-indexed bonds to actual bullion.

“And so they think that they can discourage physical gold demand because it put stress on [the government’s] current account balances a few years ago,” Christian says.

Then there’s the so-called “gold monetization scheme,” which is a program designed to encourage individuals and temples laden with gold to voluntarily deposit some of their bullion in exchange for a “2 percent or more” interest rate.

Theoretically, the gold would be held on deposit. In practice, however—again, according to Christian—it would be lent or sold to the jewelry industry, thereby reducing gold imports.

This means, of course, that the bullion—including everything from gold trinkets to cherished wedding ornaments—would be melted down. 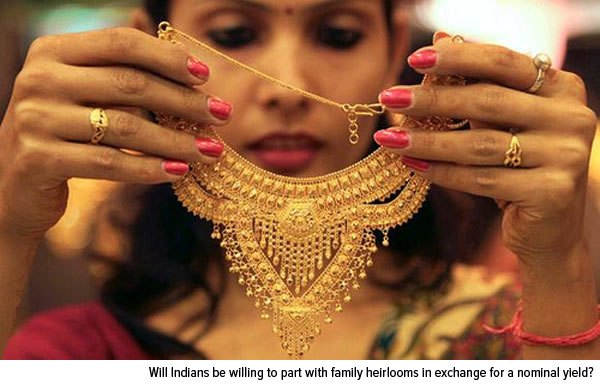 “Not many [Indians] would want to see their long-preserved, family-inherited, emotionally-attached piece of yellow metal lose its identity and ‘feel’ by melting it for meager return,” writes columnist Dinesh Unnikrishnan of Indian news agency Firstpost.

The government’s multifaceted strategy might not be as drastic as the one enacted by President Franklin Roosevelt in 1933, which forbade the “hoarding of gold coin, gold bullion and gold certificates within the continental United States.” For now, Indians’ participation in the two progressed programs is completely voluntary.

“Given the cultural and traditional affinity of Indians to their family-owned gold ornaments,” Unnikrishnan writes, “the only incentive for them to come forward and pledge their gold under the scheme is higher returns.”

Will Indians be enticed?

1. Are you interesting in buying an Indian sovereign gold coin?
View Results

All opinions expressed and data provided are subject to change without notice. Some of these opinions may not be appropriate to every investor. By clicking the link(s) above, you will be directed to a third-party website(s). U.S. Global Investors does not endorse all information supplied by this/these website(s) and is not responsible for its/their content.