As a follow up to yesterday’s Reuters post on silver coin sales going through the roof, here’s a link to another short Reuters piece showing just how high Australia’s Perth Mint silver coin sales were in September – and a chart from Nick Laird’s sharelynx.com demonstrating how absolutely phenomenal demand was last month – several times that of previous months this year, and a huge new record for monthly sales.  A Bloomberg article also reports on the remarkable September figure and a link to that is also shown below.  As the Reuters  article notes, most of the demand last month came from the USA and Europe, presumably prompted by the low price and the rationing of sales by the U.S. Mint due to North American demand – something referred to in yesterday’s article – see: Silver coin shortages through the roof.

One wonders how long this enormous demand for silver coins can go on before it impacts on the metal price rather than just in terms of premiums on coin purchases?  According to major precious metals retailer APMEX figures, premiums on silver Eagle coins in the U.S. have been running at close to a huge 50% for purchases of 1-19 coins and up to 40% for bulk orders which suggests investors are prepared to pay high prices for physical silver in coin form and is obviously the way they see the market as moving in the medium to long term.

Incidentally, the Perth Mint September figures also showed strong demand for gold coins, which at just over 67,000 ounces was the highest level this year, although not a new record. 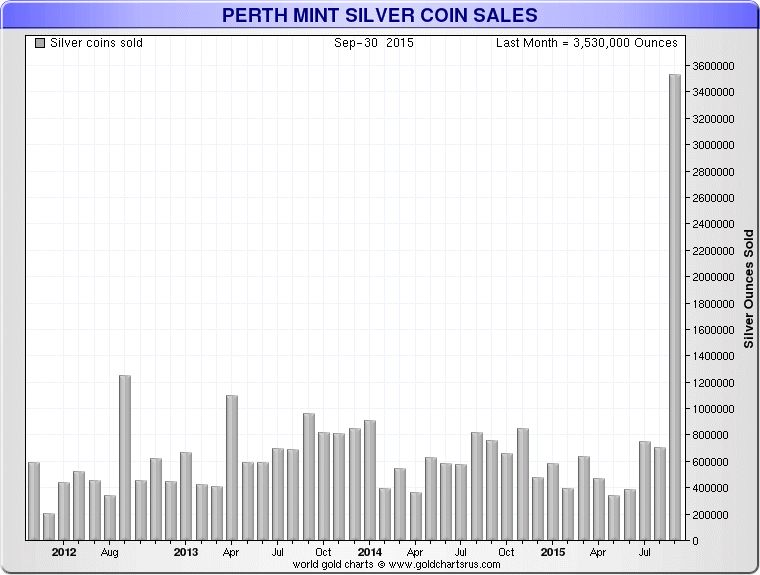 The rush for silver coins has pushed the global market into an unprecedented supply squeeze, forcing some mints to ration sales and step up overtime while sending U.S. buyers racing abroad to fulfill a sudden surge in demand….

Silver sales from the Perth Mint, which refines bullion output from Australia, surged to the highest level in at least three years as declining prices boosted demand.

Sales of silver coins and minted bars jumped to 3.35 million ounces in September from 707,656 ounces the previous month, the mint said on its website on Friday. That’s the highest on record according to mint data compiled by Bloomberg dating back to 2012. Gold sales rose to 63,791 ounces, the highest in a year, from 33,390 ounces in August….

To read the full Bloomberg article, which also comments on a fall in silver held in ETFs, CLICK HERE