The latest week’s figures on Shanghai Gold Exchange withdrawals see that the Chinese demand for gold remains enormous.  It may have been exaggerated a little due to the prior week being a short trading one due to the Chinese holiday which kept the Exchange closed on the Friday and Saturday, but even so the latest week’s SGE withdrawals totalling 73.7 tonnes for the week ended September 11th is one of the highest single week figures on record – and brings this year’s total to date to just short of 1829 tonnes.  This is fully 241 tonnes higher than at the same time in 2013 when the annual SGE deliveries figure was a huge new record, and 498 tonnes higher than last year – the second highest ever year for SGE withdrawals.

Surely there is some connection here between the reported rundown in COMEX Registered gold stocks and the recent backwardation in gold in London – a truly unsusual occurrence – which has been noted recently?  Physical gold is very definitely flowing east – and by the SGE figures at an increasing rate.  Once again we re-iterate that whether SGE withdrawals are an accurate representation of Chinese gold consumption as some Chinese officials tell us they are certainly a terrific indicator of the continuing Chinese thirst for the yellow metal.

Once again we publish the latest chart from Nick Laird’s sharelynx.com website comparing the latest SGE physical gold withdrawal figures with those at the same time in previous years showing how Chinese gold interest, if anything, is accelerating as its middle class continues to grow. 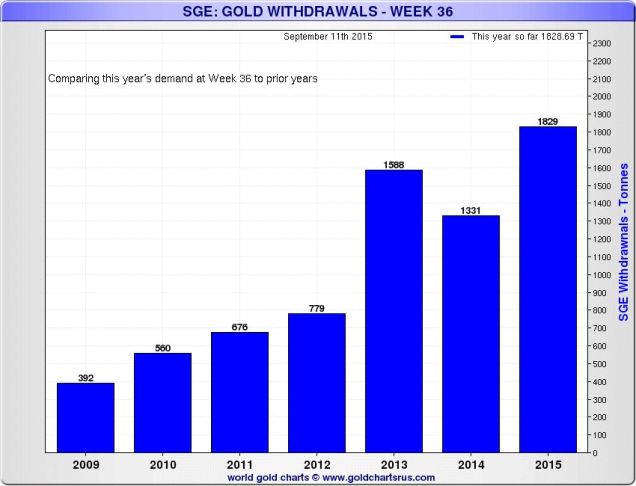 As we have noted before it looks like the SGE may be headed for a huge new record in physical gold withdrawals this year – particularly given that the final two months of the year are usually among the strongest for SGE deliveries and the current part of the year usually among the weakest.  The latest projection for the full year total is 2,600 tonnes plus which represents around 80% of global new mined gold supply.  If the current weekly rate holds up for the remainder of the year this percentage could be even higher.  With Russian central bank purchases also high, and Indian demand to take into account to, its not surprising that Western gold stocks appear to be running down.