Contrary to some of the expressed media-disseminated information Chinese physical gold demand, as indicated by gold withdrawals from the Shanghai Gold Exchange (SGE), remains at a very high level indeed for the time of year.  The latest figure for withdrawals for the week ended August 7th was 56 tonnes, bringing the total for the year to date to a massive 1,520 tonnes.  This is a full 135 tonnes higher than the previous record for Chinese gold demand at the same time of year – back in 2013.

A particular feature of this year’s SGE withdrawal figures has been the continuing strength of demand so expressed through the Summer months when demand normally falls away.  This year weekly demand over the period has been mostly above the 50 tonne mark – indeed it was well over 70 tonnes just three weeks ago – and this is at a time of year when 30 tonnes plus normally represents a strong demand week on the SGE!  See chart below from www.sharelynx.com. 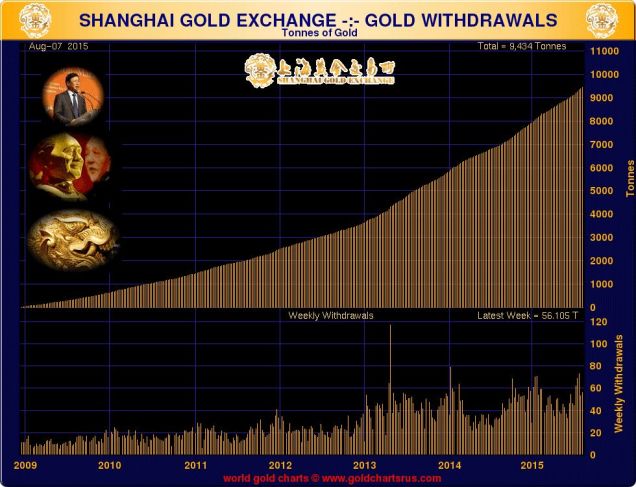 If one checks out the weekly withdrawals bar chart (the lower section) one can see just how strong recent movement through the exchange has been in comparison with previous years.

Interestingly the Chinese Central Bank – the Peoples Bank of China (PBoC) – has also now started to report monthly updates in its gold reserves (see China gold reserves up 19 tonnes in July. Really?!) which could be seen as adding to overall Chinese demand, although many Western analysts are unconvinced about the accuracy of PBoC statements regarding the size of the nation’s real gold reserves.

The big question may well be has the recent devaluation of the yuan against the dollar, coupled with the admittedly fairly small gold price recovery to date, started to redress sentiment in the gold market in the West where prices are set.  There is news now of some of the big bullion banks taking deliveries of physical gold on their own account, and also of shortages of registered gold available for delivery in COMEX warehouses having to be ‘rescued’ from dangerously low levels by a major reclassification of a big hunk of gold from the Eligible to the Registered category by JP Morgan.  Is the tide turning at last?  This could presage a very interesting second half of the year in the gold markets of the world.