The importance of Hong Kong as a channel for Chinese gold imports continues to diminish with nearly half of Swiss June gold exports going direct to the mainland.

As we have noted here before, there has been an increasing trend for China to import gold directly via its mainland ports of entry rather than via Hong Kong, which makes Hong Kong to China gold export data less and less relevant.  So headlines like the recent one from Bloomberg: China’s gold buying from HK drops to lowest in a year  and the accompanying ‘analysis’, which puts it all down to lack of mainland China demand, have to be seen in context and as potentially misleading.  Firstly June is normally a low month for gold trade in the area, but even so the sentiments expressed in the accompanying article seem to be countered by Shanghai Gold Exchange withdrawal figures.  These arerunning exceptionally high for the time of year with 69 tonnes withdrawn from the SGE in the latest week for which stats are available at a time of year when we might normally expect to see withdrawals of 20-30 tonnes – See: What to make of gold

One of the biggest exporters of gold to Hong Kong and China is Switzerland, and luckily we have official Swiss statistics to throw a little more light on this subject.  In June total Swiss gold exports totalled just under 100 tonnes with 32.3 tonnes going to China and Hong Kong combined. But of this total fully 43.6% went direct to the Chinese mainland, bypassing Hong Kong altogether which makes the Hong Kong export figures to China less and less indicative of overall Chinese gold imports.  Indeed for the whole of 2014 around 37% of Swiss gold exports to China and Hong Kong – which together amounted to 600.3 tonnes – went directly to the Chinese mainland without first landing in Hong Kong.  It is perhaps fair to assume that gold exports to mainland China from other nations is also seeing an increase. 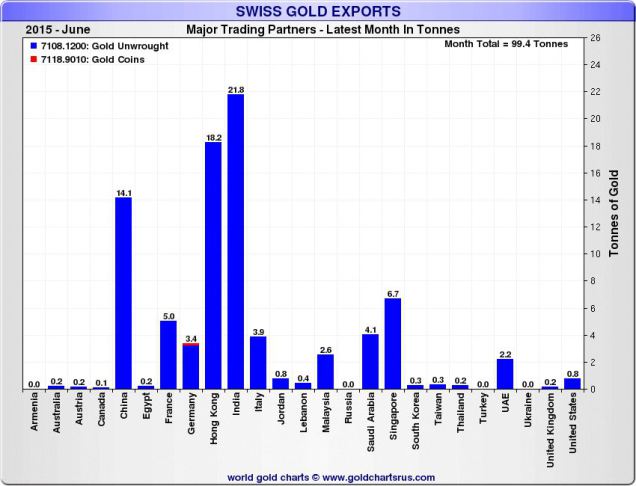