One of the big questions which the gold sector may be asking is what is the low gold price doing to Chinese demand.  Have the Chinese become disillusioned with gold given they piled in so strongly in 2013 when Shanghai Gold Exchange withdrawals for the year hit a massive record 2,181 tonnes, but the gold price has largely been on a downwards path ever since.

We had already seen the beginnings of a pick up in Chinese demand, as expressed by SGE withdrawals, when they hit well over 60 tonnes for the week ended July 10th (see Huge latest week SGE gold withdrawal figure – 62 tonnes) all at a time when seasonality suggests Chinese demand should actually be at its lowest.  But the gold price continued to fall so it would be particularly interesting to see how demand would continue, or whether it would actually increase with more bargain hunters climbing in.  In the event, SGE withdrawals for the week ended July 17th have come out at the fifth highest weekly total ever – again, it should be emphasised that this high demand level has been at what is normally a very weak time of the year for Chinese demand – and brings SGE withdrawals for the year to date according to the chart below from Nick Laird’s excellent www.sharelynx.com and www.goldchartsrus.com charts sites to a huge 1,366 tonnes – probably nearly 80% of global new mined production over the same period.  (Global weekly new mined gold supply is around 62 tonnes – so for the past two weeks Chinese SGE withdrawals will have actually exceeded the world’s mined supply!) 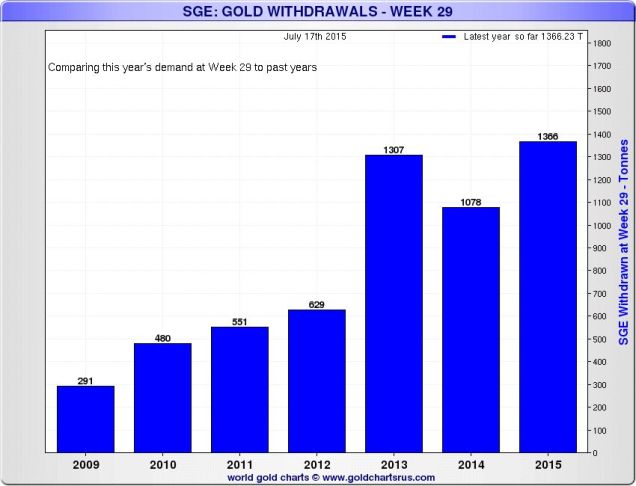 As can be seen from the above chart, SGE Withdrawals are currently running some 59 tonnes higher than at the same stage in China’s record 2013 year.

Now we will have to wait for another week to see what the past week’s gold price takedown did to Chinese SGE demand – it could well prove to have been even higher and may have helped lead to the end-week price pick up.

But a word of caution here.  In China’s record 2013 year for gold demand, as expressed by SGE withdrawals, the gold price fell from a beginning of the year level of $1681.50 at the LBMA morning fix on January 2nd to 1201.50 at the close on December 31st, a decline of 28.5%. The fall was perhaps precipitated by heavy gold sales out of the major gold ETFs in the West and although these were more than counterbalanced by the Chinese figures the latter seem largely to have been ignored by the COMEX dominated market.  And this year we are again beginning to see big ETF gold liquidations, albeit not at the same levels as in 2013.   This year, gold opened in London on January 2nd at $1184.25.  A similar 28.5% decline would take the year-end gold price down to just below the $850 level!  We very much doubt this will actually happen – indeed gold could be well set for a major recovery after the absolutely blatant bear raid which has highlighted how easily the gold price can be manipulated to a previously unenlightened general public and the continuing physical gold flows from West to East have to make such manipulations more difficult as Western physical stocks are depleted.

It is also as well to note that the fall in the price of gold in dollar terms so far this year has actually been exceeded by falls in the price of copper, nickel, aluminium and iron ore in particular – See my article on Mineweb on this: Commodities collapse: It’s not just about gold.  Indeed the overall commodities price crash suggests similarities to 2008 and the so called Global Financial Crisis which brought down, not only commodities, but global stocks of any kind.  Are we set for a repeat?  Food for thought.