Latest figures out of the Shanghai Gold Exchange show that Chinese H1 gold withdrawals are running even higher than in the record 2013 year.

With a latest week (to June 26th) total of 46.167 tonnes of gold withdrawn from the Shanghai Gold Exchange – again a high level for the time of year – the total for the year to date has reached a massive 1,162 tonnes and assuming withdrawals from the SGE have continued at around the same rate in the final two trading days of the month, we can probably add another 18 tonnes to make gold demand for the full six month period, as represented by SGE withdrawals, 1,180 tonnes.  This will be comfortably a new record for the first half of the year – the previous record was in  2013 with just under 1,100 tonnes withdrawn in H1 and when the full year figure was 2,197 tonnes.

Consider that total global new mined gold supply for the half year period will have been only around 1,600 tonnes that gives a pretty good idea of the significance of Chinese gold demand in the world picture – accounting for around 74% of new primary supply on its own.  And China only accounts for less than half of global gold demand.  Lowish gold prices mean that recycled gold supply is weak and so far this year liquidations out of the gold ETFs are small in comparison to the previous two years.  And what is apparent is that Chinese demand continues to grow – and anecdotal evidence suggests that this is receiving a further boost as Chinese investors turn back to gold following a huge crash on the overbought Chinese stock markets.

There has thus been a huge demand for gold in China over the past three years in particular.  (See the chart below of weekly SGE withdrawals since 2010 from www.bullionstar.com website’s long term SGE gold withdrawals chart).  2013 was a record year for SGE trade and 2014 only a little smaller, and given that H2 SGE withdrawals tend to exceed the H1 figures in total, we could well be heading for a substantial new annual record, confirming the overall upwards trend. 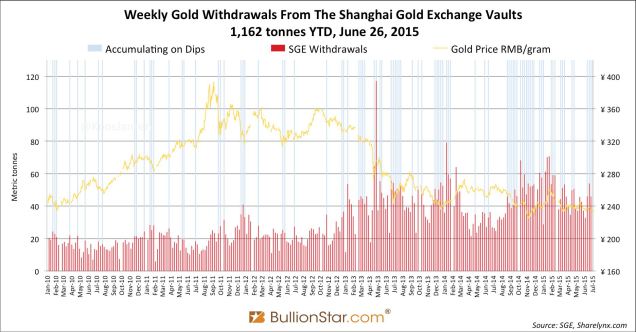 Koos Jansen, in his latest bullionstar.com blog, expresses considerable surprise that global financial turmoil, as overtly expressed by the ongoing Greek tragedy and the Chinese stock market collapse, and uncertainty on western markets too, has not led to a gold price surge.  “This smells like market rigging.” he writes. ”Surely the last thing the authorities need at this moment is gold on the move. Various media and bullion dealers report demand for physical gold in Europe is strong.”  Add to this something of a resurgence in demand from the world’s other massive gold consumer – India – and an apparent recovery in demand for gold and silver bullion coins in the U.S. and Europe alongside the Chinese demand noted above and indeed it is surprising that gold has been falling regardless.

As usual the media puts this down to the prospect of the U.S. Fed raising interest rates sooner rather than later, but by now this prospect should have been taken into account anyway in gold pricing given that the Fed will only implement a very cautious policy and, at least initially, rates are likely to remain effectively negative after any initial rises.  As we have said before there appears to be a concerted campaign to play down gold’s potential as a significantly rising gold price would indicate a loss in confidence in global fiat currencies, and governments and central banks can’t afford for this to happen and will doubtless continue to brief against it.