This article was originally offered to Mineweb, but Mineweb has now asked me to cut back on gold and silver related commentary-type articles as not fitting in with the direction on which they want to take the site.  Consequently it has now already been published on sharpspixley.com  and as yet where my future precious metals commentary articles will be published, apart from here on lawrieongold.com, remains undecided.

We have mentioned before the considerable emphasis the global mainstream media has placed on Hong Kong gold exports to China as being indicative of the level of overall Chinese gold demand, while we have long averred that this is no longer the case with a large proportion of imported gold now going directly to China’s Shanghai Gold Exchange (SGE) through which it must pass, being delivered to other Chinese ports of entry.  We have been assuming that around 40% or more of Chinese gold imports have been coming in directly rather than via Hong Kong which means that Hong Kong can no longer be considered a proxy for overall Chinese gold imports.

But looking at the latest chart from Nick Lynn’s www.sharelynx.com website, published below, it appears we have maybe significantly underestimating the true level of gold imports directly into mainland China and bypassing Hong Kong altogether – at least calculated in terms of deliveries via Hong Kong and actual SGE gold withdrawals: 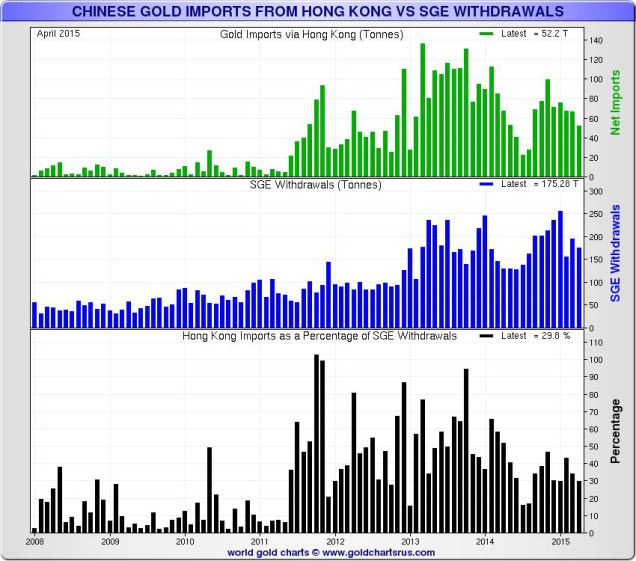 As can be seen from the chart, for a considerable period now, SGE gold withdrawals have exceeded gold imports via Hong Kong by a very substantial amount – an amount which has fallen off dramatically since China loosened its import restrictions on gold coming in directly to mainland China ports of entry.  However it should be recognised that a significant part of the difference (just under 40 tonnes a month relates to gold production from China itself, which also passes through the SGE) but even taking this into account it definitely looks as though the proportion of gold coming in directly to the Chinese mainland continues to rise despite fluctuations in the amounts coming in via Hong Kong.  On the latest available figures, if we take the difference between imports from Hong Kong and SGE withdrawals, there is a shortfall of 123 tonnes.  If we subtract 40 tonnes of Chinese production from this, the discrepancy is still 83 tonnes suggesting 47% of the gold withdrawn from the SGE is coming in to China directly.

The Sharelynx chart also shows that so far this year this kind of percentage difference between Hong Kong gold exports to China and SGE withdrawals has been fairly consistent at the 40% or above level.

Now there is wriggle room in these statistical comparisons.  Chinese gold production tends to be lower at the beginning of the year than later on so the differences may well be even larger in Q1 and Q2 – while there may well additional stockpiled gold available within the SGE which  enables it to fill the currently high-for-the-time-of-year withdrawals even when inward gold flows may be lower than actual demand.  Nevertheless the figures are yet a further strong indicator that Hong Kong gold exports to the mainland are no longer a proxy for overall Chinese gold consumption.

Concerning the impact on the overall gold price, and thus on gold and gold stock investment, while total levels of Chinese imports in terms of physical gold flows from West to East should perhaps have an impact on the gold price, it is patently obvious that this can only be happening to a very limited extent, if at all.  Gold prices are still being set in New York and London regardless of the overall level of Eastern demand – See: Gold: The US sets the price but Asia does the buying.  This anomaly can only continue for so long (but this remains an indeterminate timescale), but with continuing Chinese moves to take part in the gold price setting process, the day when gold price control shifts to the East has to be drawing closer.  But whether Asian gold price control will be any more benign for the gold and gold stock investor remains to be seen!