As we have reported here, Shanghai Gold Exchange withdrawal figures are currently running very significantly higher than usual for the time of year, contrary to much mainstream media comment that the Asian dragon’s gold demand is weakening.  The latest week (to June 19th) for which figures are available show SGE gold withdrawals at 54 tonnes at a time of year when they would normally struggle to reach even 30 tonnes – See the lower section of the chart from Nick Lynn’s www.sharelynx.com and www.goldchartsrus.com websites published below. 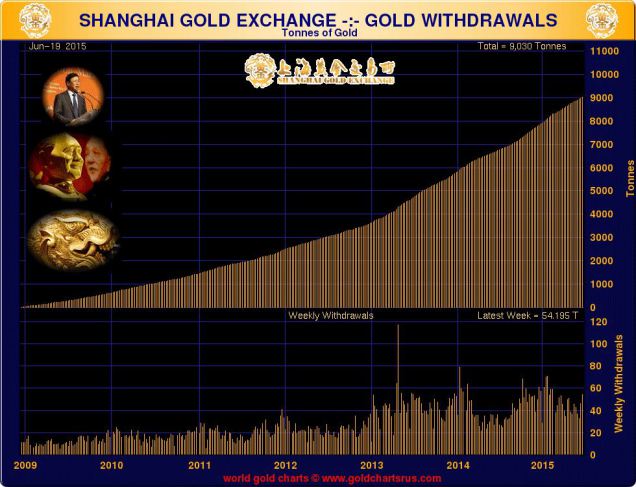 SGE withdrawals for the year to date have now exceeded 1,115 tonnes with a further week and two business days to go before the end of the period.  The half year total thus looks like reaching over 1,150 tonnes – not bad for a nation where the mainstream press keeps on telling us demand is weak and that China is being overtaken by India again as the world’s biggest gold consumer.

Weak demand had been put by the press down to the perhaps excessive rises in the stock markets enticing Chinese investors away from gold – but there was actually little indication from the SGE figures that this was indeed the case.  But now with the stock market turning down very sharply it does look as though gold may be benefiting.  Anecdotal reports also tell us that gold premiums in Shanghai have been strong, but at a time of year when gold demand is normally at its nadir.