After May’s big fall in central bank gold buying when China announced no purchases at all and Russia only three tonnes, gold investors should be relieved that these two nations, which are by far the largest central bank buyers of gold, are back on track, with China announcing purchases of 15 tonnes of gold and Russia 18.7 tonnes in June.  these two nations between them have been accounting for perhaps over 70% of last year’s estimated (by Metals Focus) net central bank total of around 566 tonnes – one can’t know for sure as China only started publishing its monthly gold reserve increases from mid-year.  This year to date their combined purchases have fallen off a little, even discounting the May hiatus, while Venezuela has sold  at least 67 tonnes to relieve its foreign debt situation.  we thus believe that total central bank net gold purchases this year may fall to as little as 300-350 tonnes – some 40% or more below last year’s estimated total.

Do check out my articles on seekingalpha.com and sharpspixley.com on the subject which go into more detail.  See:

Central Bank Gold Buying Back On Track on Seeking Alpha

Russian central bank gold buying back too on sharpspixley.com

The World Gold Council (WGC) has now released the latest figures for national central bank gold holdings for November, and while the total level of gold purchases remains at a significant level overall, it should be recognised that the vast majority of the reserve increases is only coming from three countries – China, Russia and, to a lesser extent, Kazakhstan.  Few other countries are reporting any changes at all, and those that are doing so are effectively insignificant in the scheme of things.

Over the past six months, both China and Russia have been buying in the order of between 30 and 45 tonnes per month between them.  Kazakhstan’s pace of purchase is rather smaller at around 2-3 tonnes  a month.  Over the five months to November (China was not reporting monthly increases prior to this), these three nations alone have accounted for around 90% of the global reported gold reserves increase.  And of the other 10%, Turkey accounts for around 4%, but its figures are not strictly comparable as they include that country’s policy of including gold in its reserve requirements from commercial banks, which is anomalous in relation to other nations’ reporting practices, and prone to comparatively large monthly fluctuations.

So while we do anticipate the scale of central bank purchasing to continue (China has already noted it bought around 19 tonnes in December), it does look to be particularly vulnerable to any change in purchasing policy from either of the two big buyers.  Russia in particular is a little more erratic in its month-by-month purchasing – last year for example it bought no gold in the first two months of the calendar year (and no doubt if the same happens this year the mainstream media will tell us central bank purchases are collapsing!), yet in the 11 months so far reported by the WGC, Russia has actually been the largest buyer with a total of 185 tonnes.  If it matches its December 2014 purchase of 20.73 tonnes that will bring the annual total to just over 200 tonnes – a well up on the 163 tonnes it purchased in 2014, but its month to month purchase figures can be erratic.

One should note that the figures quoted above are as reported by the individual nations to the IMF – they are not audited – and most nations just report the same numbers year in year out.  There have been doubts cast in the past on China’s reporting in particular – doubts that were shown to be correct when the Asian dragon out of the blue reported a massive 604 tonnes gold reserve increase in June, apparently accumulated over the prior 6 years, but not reported at the time.  There are thus continuing doubts about the true level of Chinese reserves, some estimates putting them considerably higher than the current figure of around 1,740 tonnes, which only comprises around 1.8% of its total forex holdings, while the top Western countries apparently manage 60-70% of their forex holdings in gold.  But these figures and levels may be equally dubious.  It isn’t only China which is believed to falsify its reported holdings to the IMF.

Both China and Russia do currently have stated policies to accumulate gold into their reserves so we do expect their purchases – and those of Kazakhstan – to continue at or around current stated levels, but the oft repeated analysts mantra that central banks are buying gold is only true in part and could be considered misleading.  It is only around the three countries noted in this article which are increasing their gold holdings on any kind of regular basis.  The rest are, at least officially, neutral in this respect.

Russia continues to amass more gold in its reserves with the purchase of another 34.2 tonnes in September, bringing its total to around 1,353 tonnes – or around 13% of its total foreign exchange reserve figure.  This is Russia’s second highest monthly total purchase in six years and represents yet another indicator of its continuing desire to downplay the significance of the U.S. dollar holding in its overall forex reserve make-up.

This is the seventh successive month that Russia has increased its gold reserve – it didn’t add to reserves in January or February.  It thus remains the world’s sixth largest national holder of gold, moving further ahead of Switzerland in seventh place which is sitting on 1,040 tonnes and closing the official gap with China which also reported increasing its gold reserve in September by 15 tonnes to 1,708 tonnes, although this only represents well under 2% of its massive forex reserves of around $3.5 trillion. Many reckon though that gold held in Chinese government accounts amounts to a far higher total than officially reported being amassed in accounts which it does not classify as part of its forex holdings and thus does not report to the IMF.

However transparency in the reporting of global gold holdings can be obscure – even for those like China and Russia which are reporting month by month official changes.  Most of the gold holders in the table above as the central banks of the countries concerned do not allow audits of their gold holdings and many have reported zero change for a number of years.  In particular, as Wikipedia points out, gold leasing by central banks could place into doubt their reported gold holdings.

Another week’s gold withdrawal figures from the Shanghai Gold Exchange (SGE) and it appears that the demand momentum is holding up – if not accelerating.  The latest figures are from the week ending August 14th with the Exchange reporting flows of 65.3 tonnes out .  This is an enormous figure for an August week when historically Chinese demand is usually at its lowest and follows several weeks of plus 50 tonne withdrawals at a time of year when 30 tonnes would normally be seen as a strong figure.

There are reports that demand has slowed over the past week given the recent recovery in the gold price, with Shanghai premiums falling accordingly, so the next week’s withdrawal figures will be viewed with additional interest to see if this really is the case, or whether Chinese overall ‘demand’, as expressed by SGE is still holding up well.

The latest figure for total SGE withdrawals for the year to date is now a massive 1,585 tonnes, fully 161 tonnes more than in the record 2013 year at the same time – see www.sharelynx.com chart below.  A quick calculation of SGE withdrawals to date (close to 50 tonnes a week so far this year), if extended over the full year would suggest a total figure for 2015 at over 2,500 tonnes – hugely higher than the record 2013 figure of 2,181 tonnes.  While one should perhaps regard a continuing weekly withdrawal rate of 50 tonnes as being an optimistic projection, it is also worth bearing in mind that SGE withdrawals are usually far stronger in Q4 than in Q3! 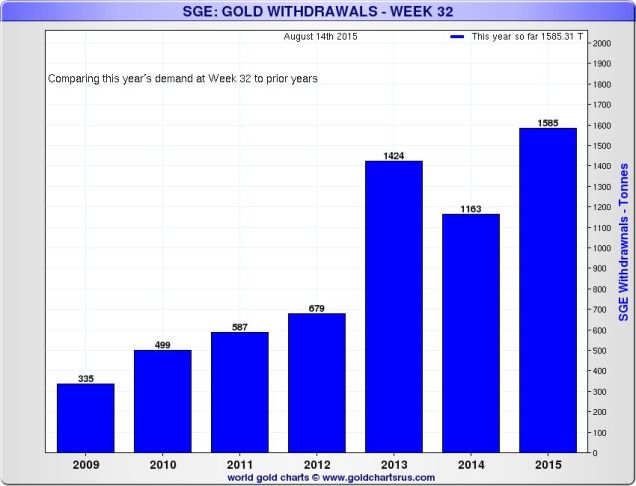 With the Chinese Central Bank now reporting its own monthly gold accumulations – 19 tonnes in July and these apparently are additional to the SGE reported figures, and Russia continuing to expand its gold reserves – another 12 tonnes in July – and Indian imports rising sharply according to latest Swiss gold export data, global physical gold demand appears to be running well ahead of new mined supply, although whether that makes any difference at all in a paper-gold futures led market is perhaps doubtful.  But with fear stalking the Dow after a huge week of falls (around 530 points on Friday alone), and general stock market indices around the globe  a sea of red, maybe at last gold sentiment is beginning to get a safe-haven boost with worries about a general worldwide stock market meltdown.